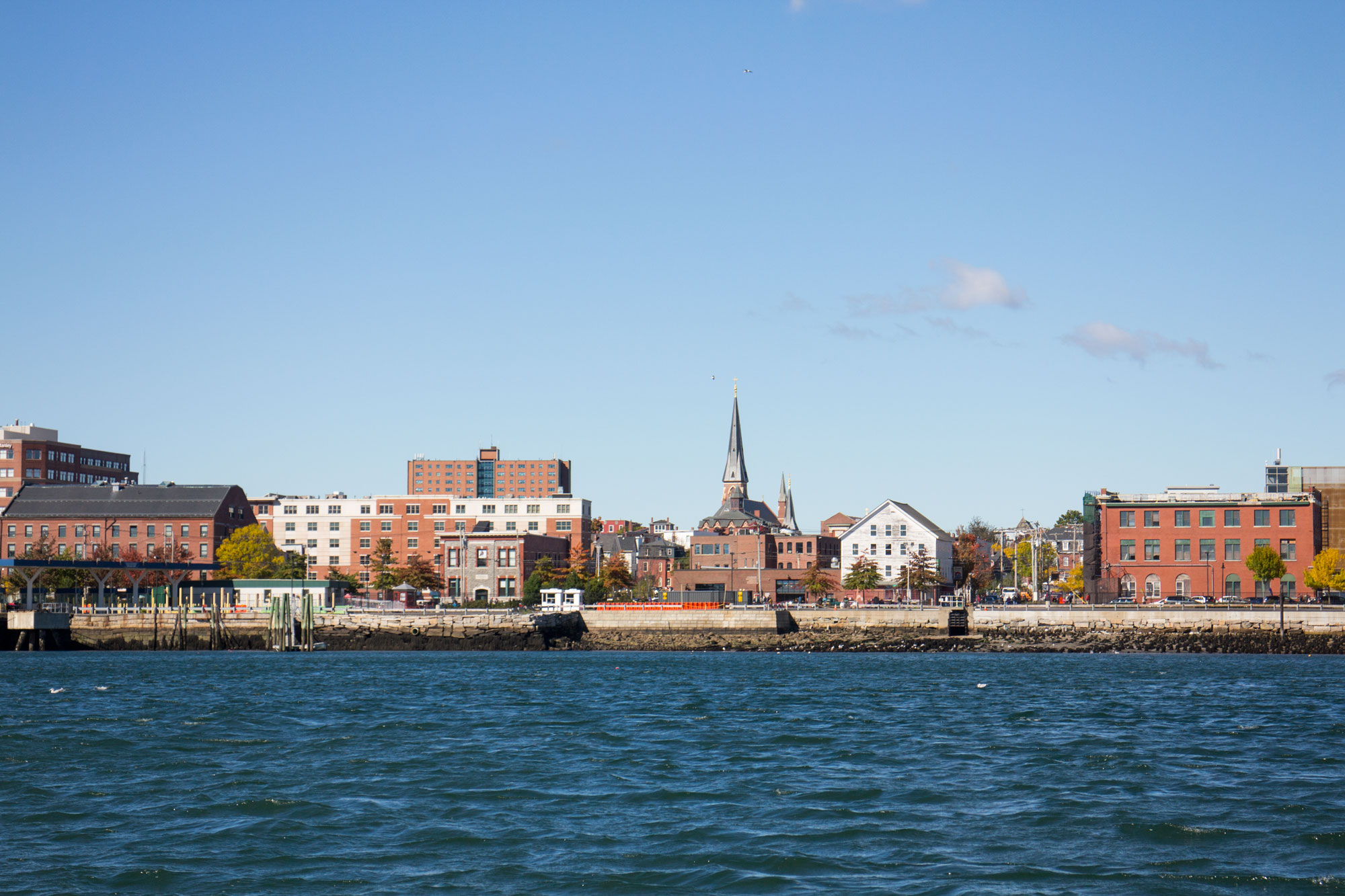 After a few days in Boston, next up on our New England road trip was Portland, Maine.

We arrived in the evening darkness to Portland, stayed overnight and then only had half a day of exploring before leaving, so it was a whistlestop tour but a lovely one!

After doing some research on-the-go we found out Portland is a very foodie city, with a massive focus on seafood (naturally, being next to the sea and all!). Sadly as Ian, my mum’s partner, is very allergic to most forms of fish a seafood joint wasn’t really an option. So on our first night we just went  to a nearby sports bar for a quick and easy dinner.

Our morning breakfast was another story, I had my sights on a very specific place, Becky’s. Which very conveniently happened to be just a couple of minutes walk from our hotel. I read about it online and everyone had given it rave reviews, but warned you have to get there early to avoid the worst of the queues. 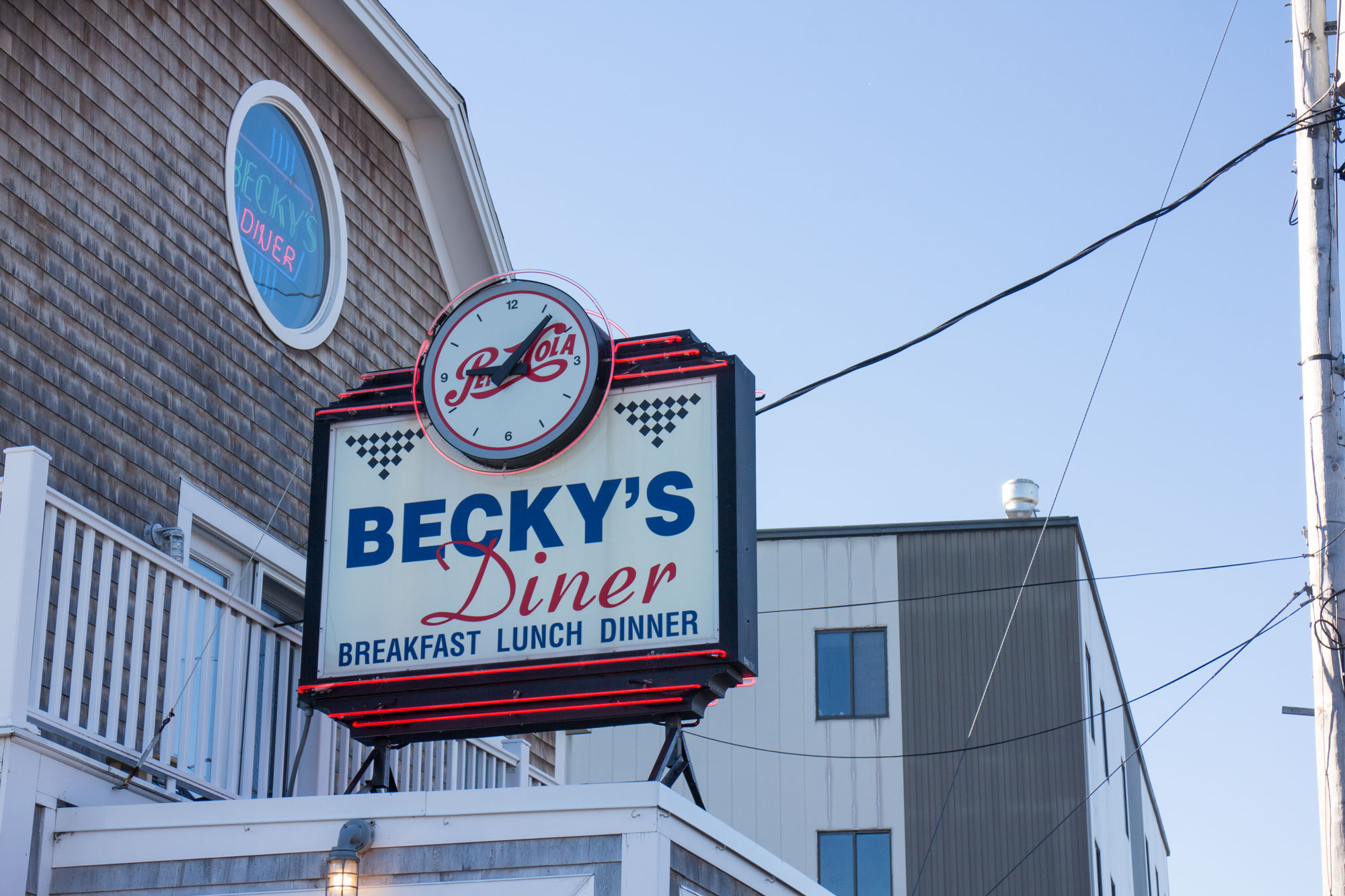 We arrived around 9am I think and the queue took around half an hour for the 4 of us to be seated at a table (sitting at the bar would have been quicker but we were after a table). It wasn’t too bad of a queue, just a bit nippy outside in the cold for half an hour! I would not want to be there at a colder/rainy-er time of year that’s for sure.

Once we were seated the staff were mega friendly, the food was well-priced and very tasty. We would all whole-heartedly recommend. So much so that we left with 2 t-shirts and a mug from their merchandise range, gotta represent! 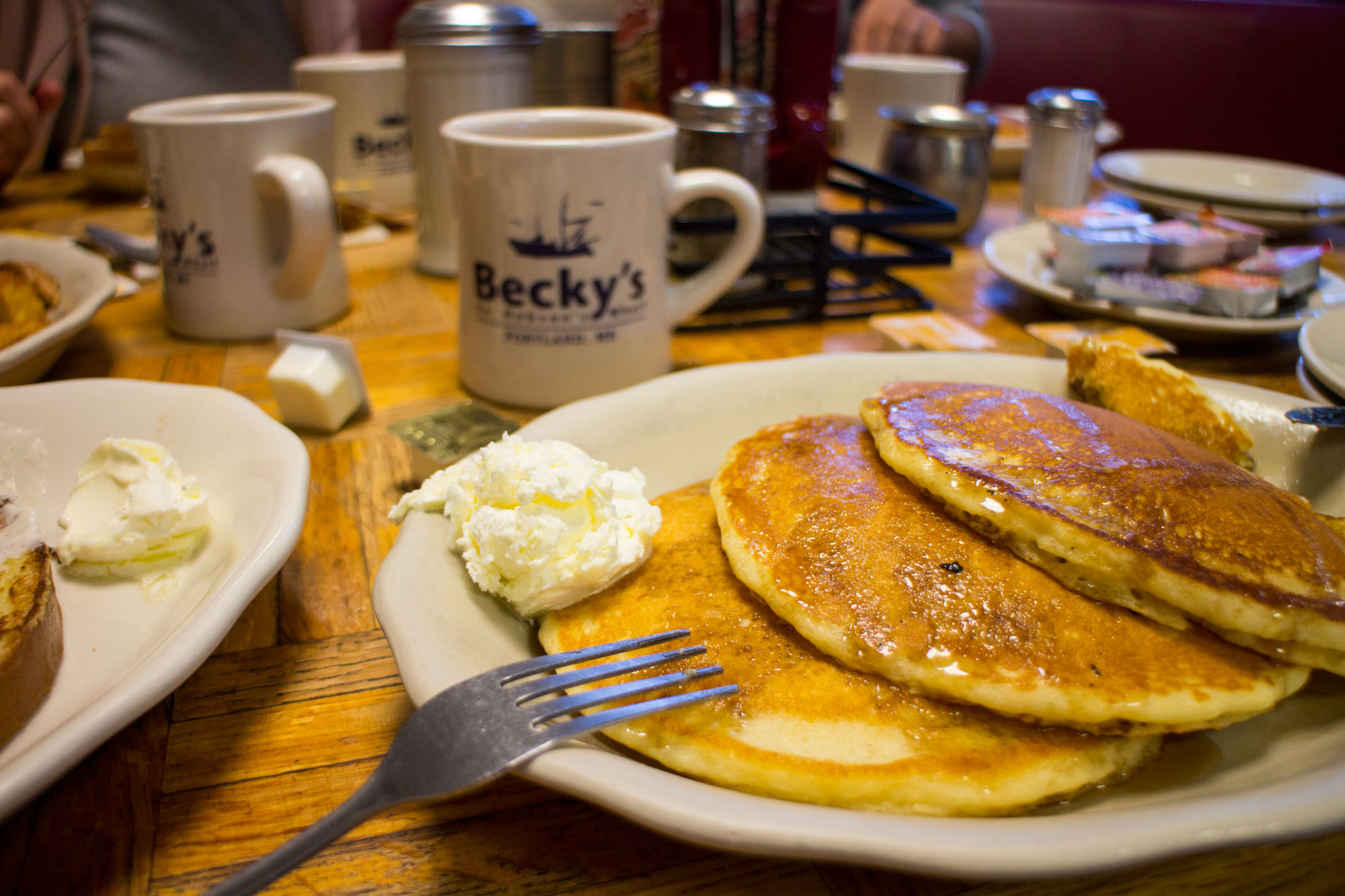 After we snaffled down our breakfast we hot-footed it down to the main shopping area to pick up the tour my mum had found and booked us all on, the Downeast Duck tour.

It’s one of those duck tour boats they have in loads of cities these days and we set off on an hours tour of the waterfront and the main town centre to see all the sights and sounds of down town Portland. The unique thing about this boat is that it’s a custom built one-of-a-kind duck boat built by the driver, and the tour guide is his son, so it’s a family affair which makes it feel all the more ‘Maine-authentic’. The guide also had a really dry sense of humour that we loved, he really made the trip a great hour of entertainment. But again, it is cold, so wrap up warm! They provided blankets but it was still bitter out in the sea so make sure you wrap up if you go at the time of year we went (October). Find out how to book the tour here. 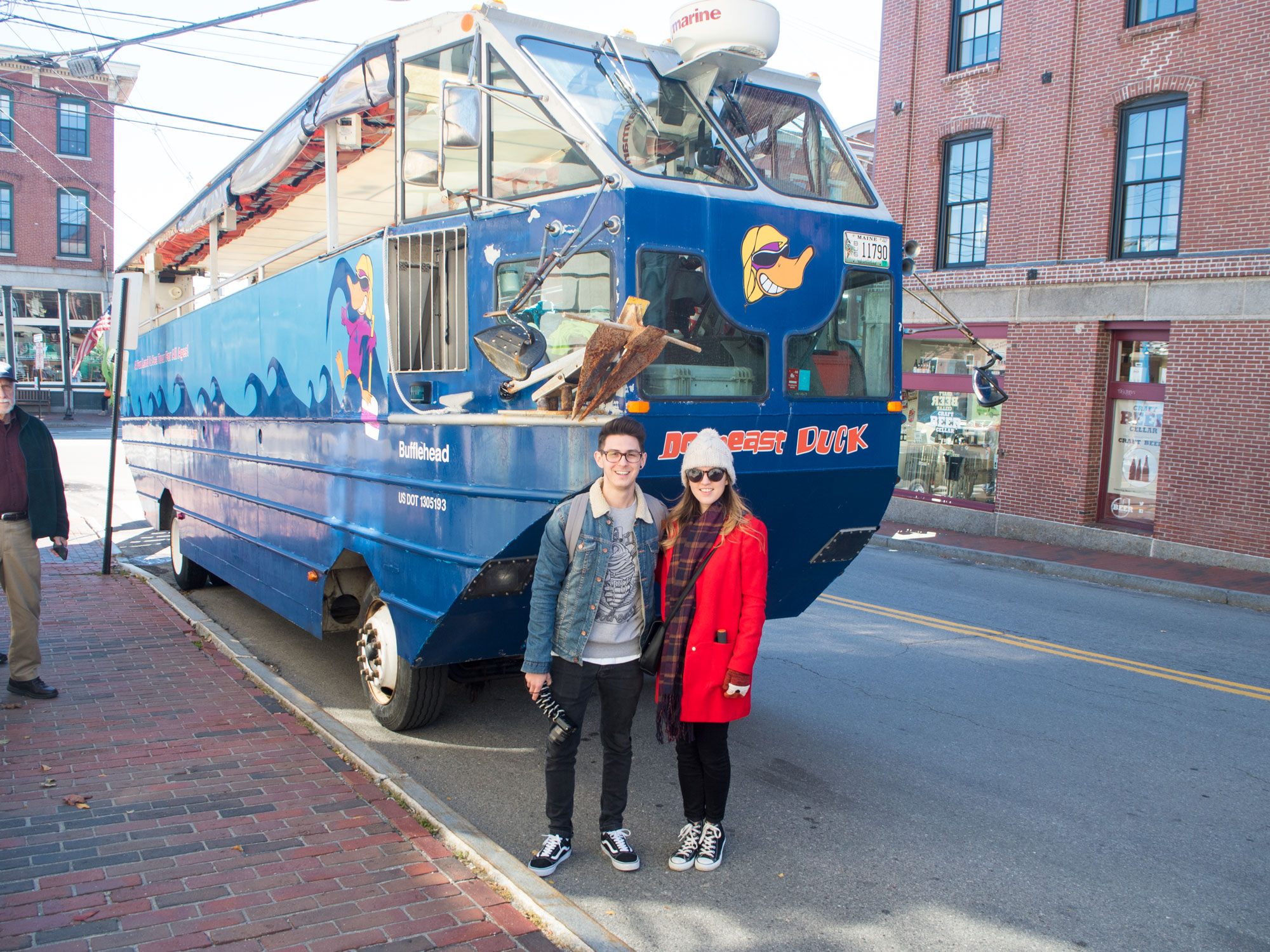 After we left the tour we wanted to spend a bit of time wandering around Portland before we had to jump in the car. The buildings and shops around the seafront area are absolutely beautiful and feel so quaint and completely unlike anything I’ve ever seen in America before. 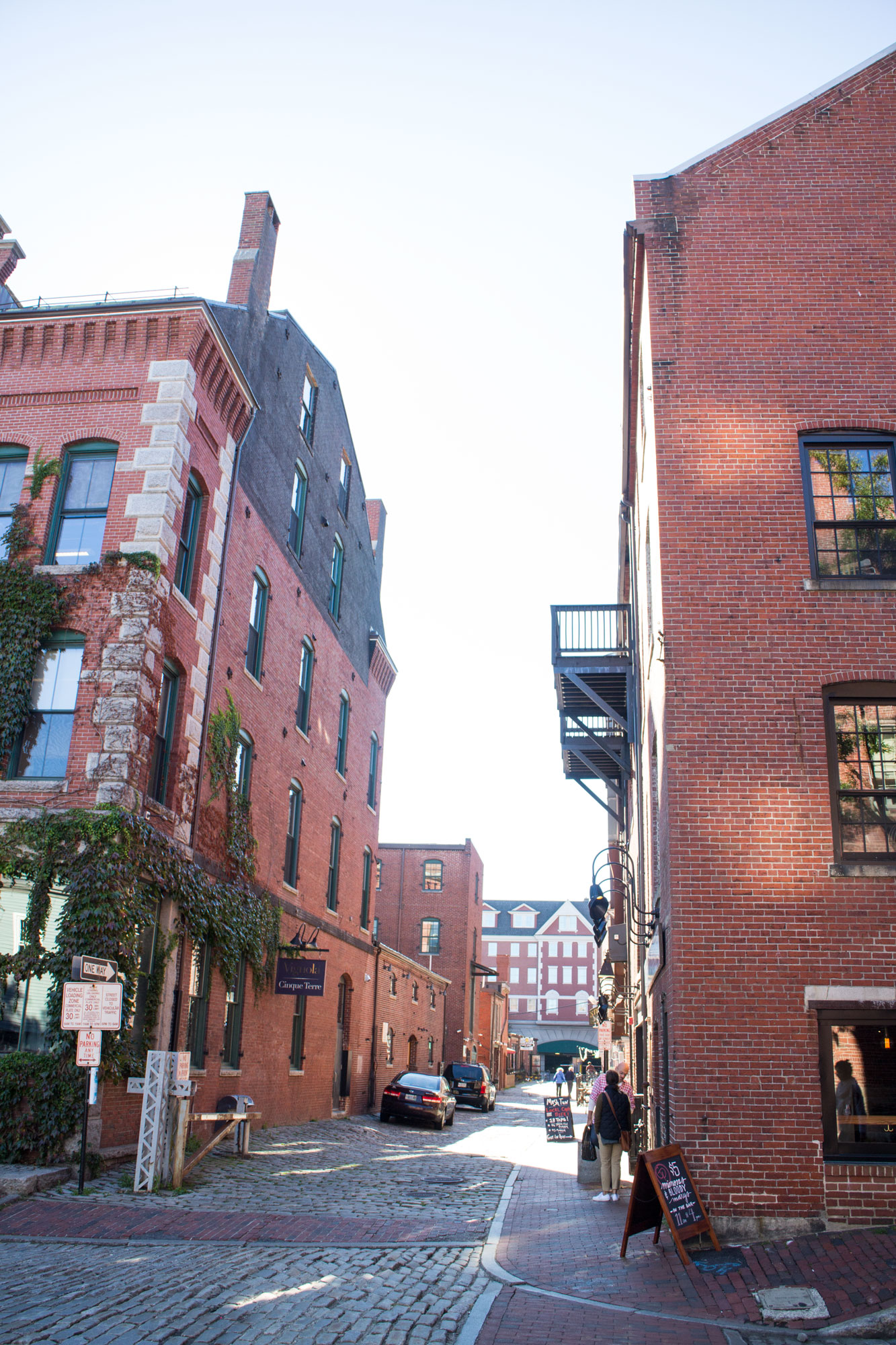 Loads of the buildings have old company names painted on the side of them which adds to the whole ‘vintage-industrial’ feel of the place. I honestly loved it and I really wish we had longer there to just wander around and soak it all in. Graphic design fiend Luke had a great time running around taking photos of all the signs, like a kid in a candy shop! You can see some of his snaps over on his Instagram. 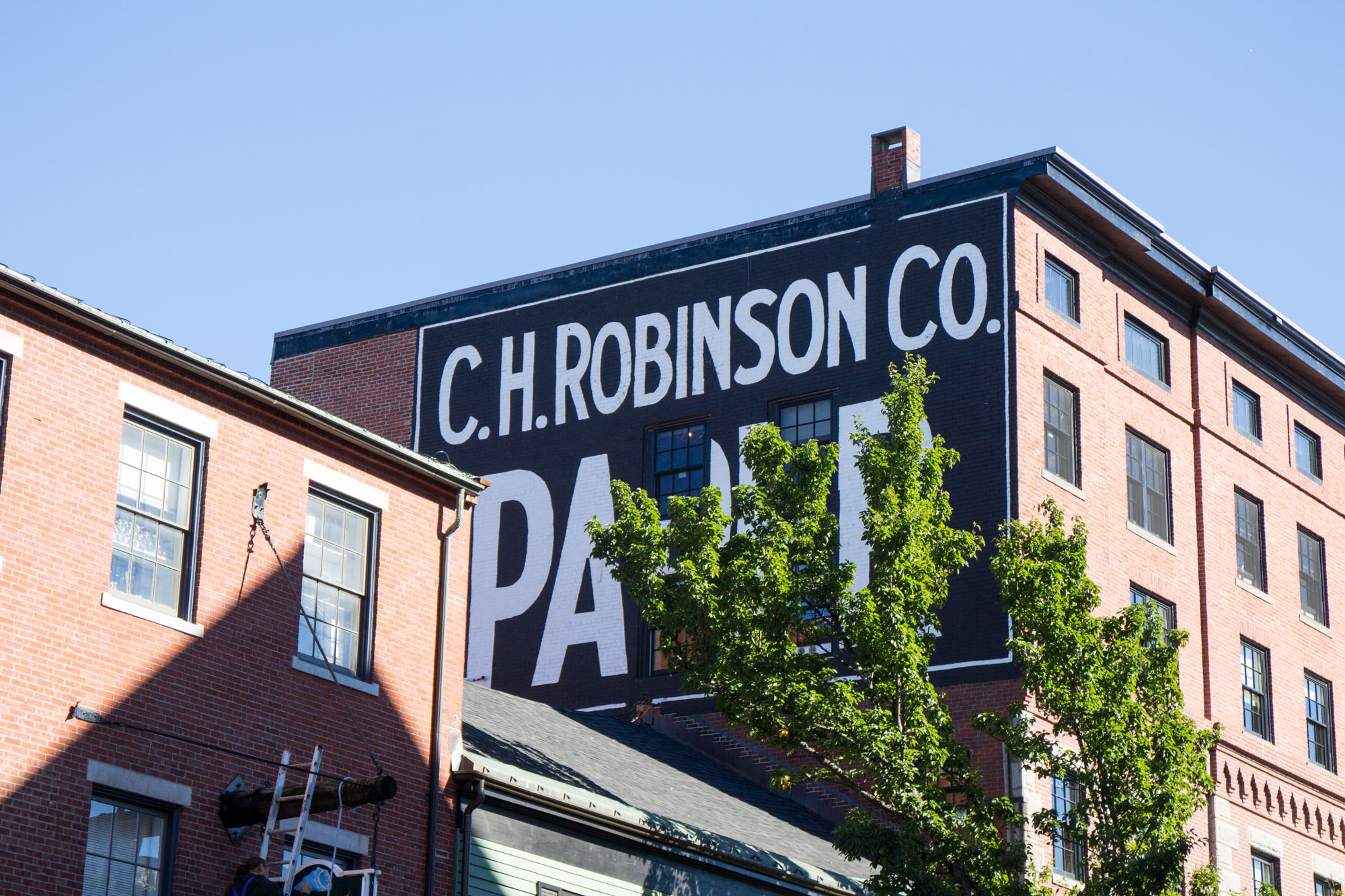 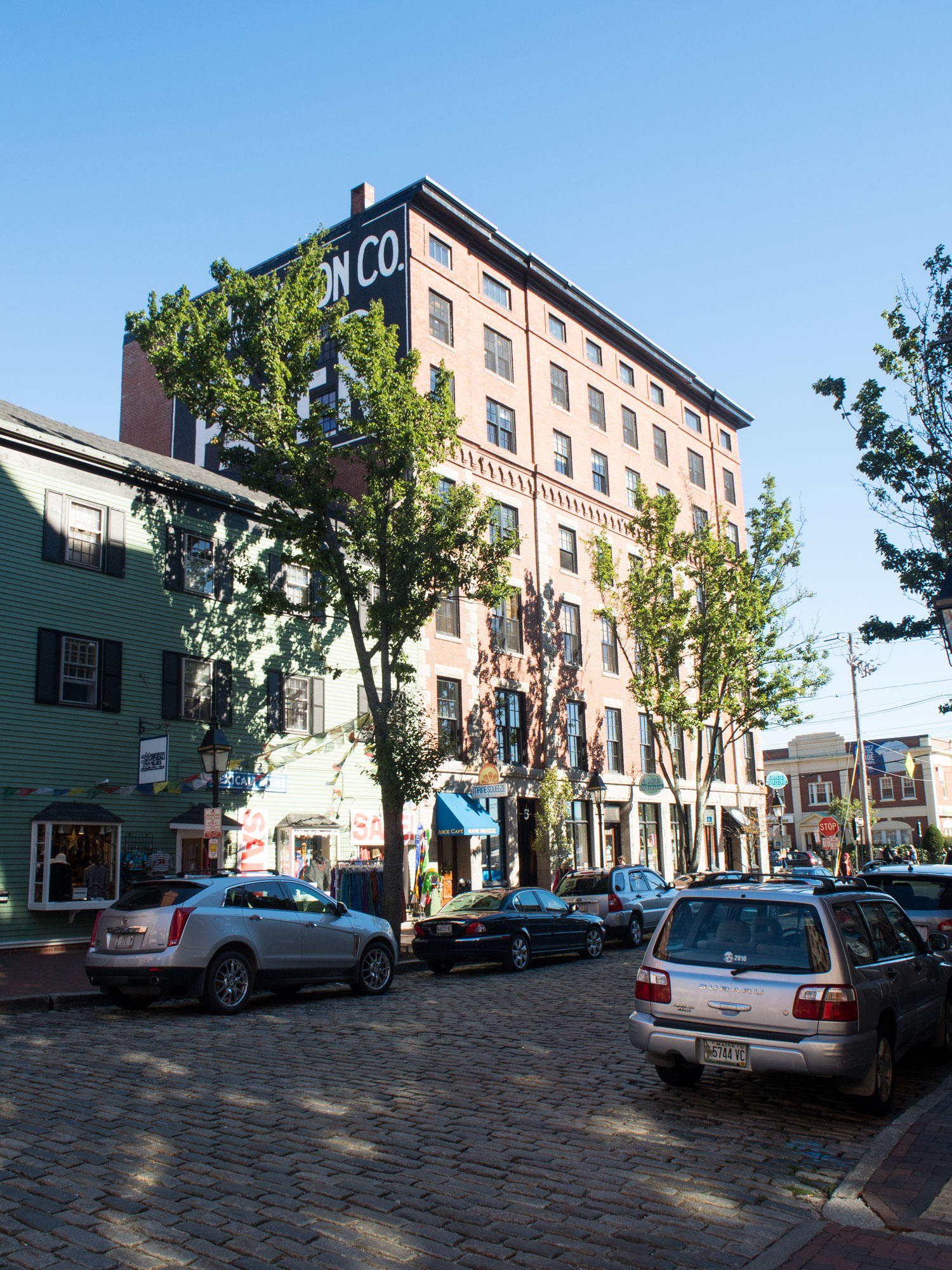 One of the other stops on our whistlestop tour thanks to the duck tour guide was the Two Fat Cats Bakery. He said we absolutely had to get a whoopee pie from there before we left so of course we obliged and stopped by to pick up a pie or two. 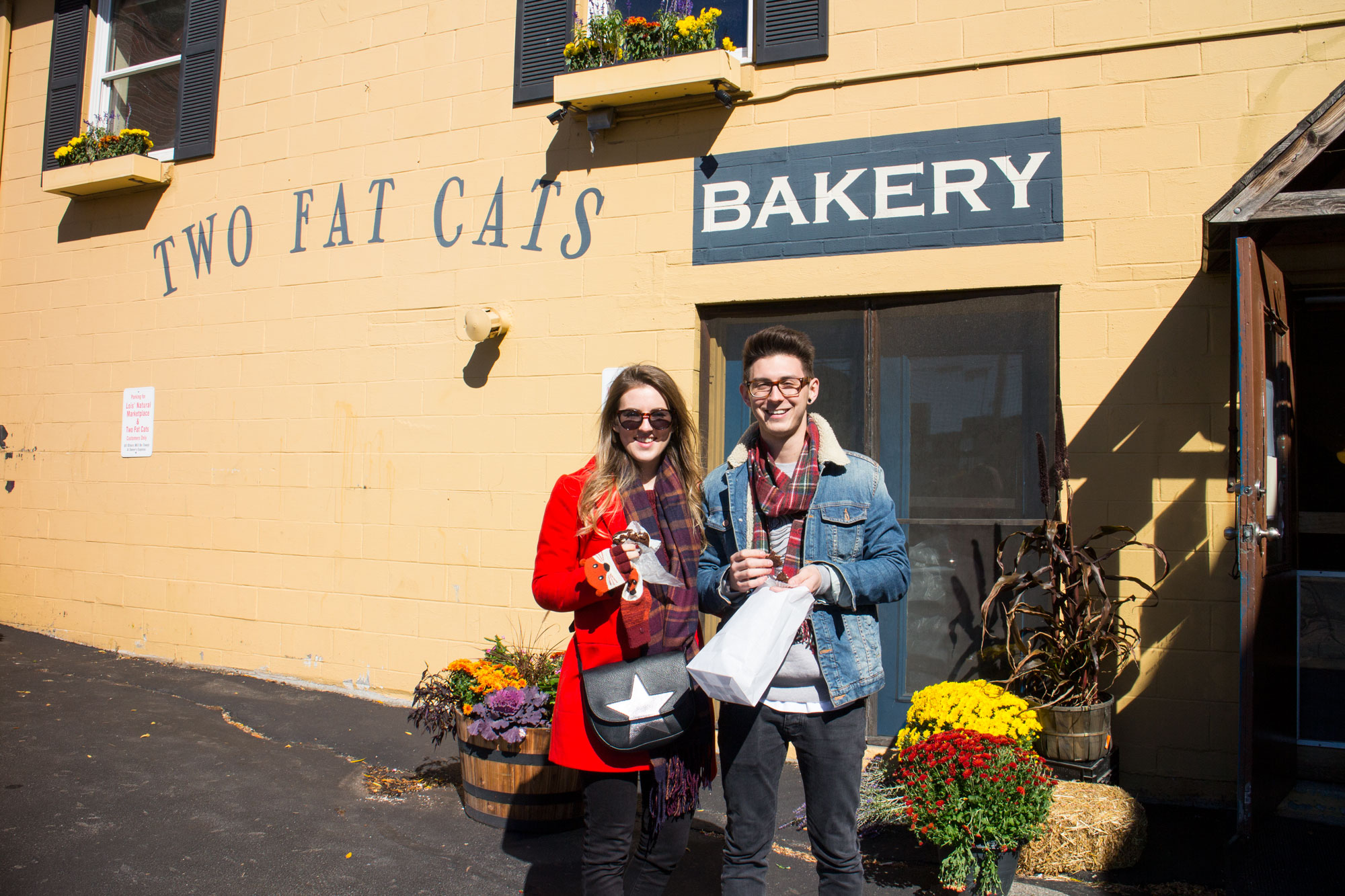 Sadly when we got there they had run out of quite a lot of goodies so we went for the safe option and picked up chocolate ones. I’ve gotta tell you though, I’m not quite sold on the whole whoopee pie thing, not really my cuppa tea, but I can’t deny they were well baked and tasty. Just a tad too rich for me. (Who do I think I am, bladdy Mary Berry?!)

(I think they missed a letter out of caramel though, rookie error) 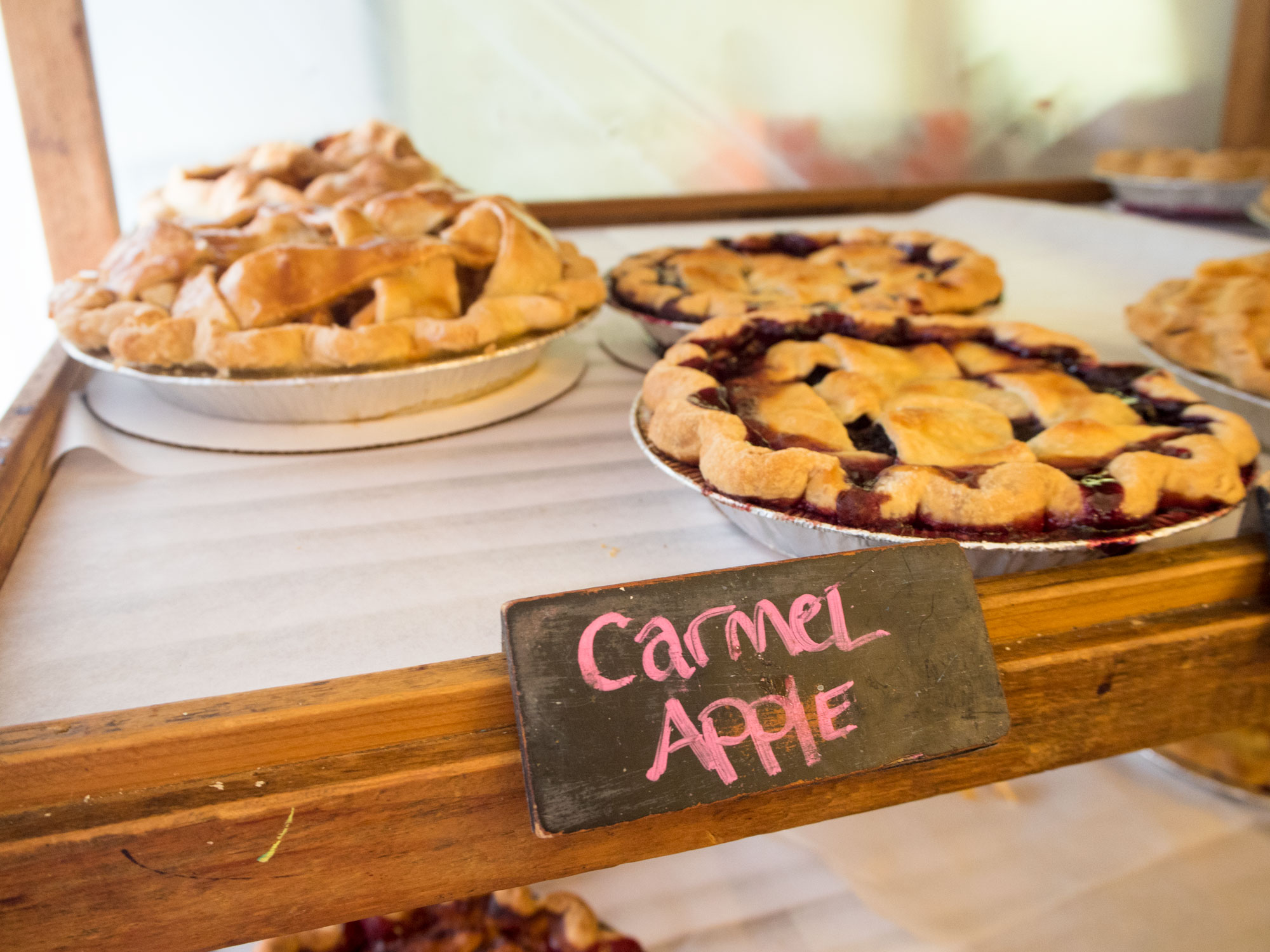 Eventually we did have to leave our hotel and the centre of Portland, but not before HEAD-ing out to the Portland Head Light (geddit? LOLz. Someone stop me before this gets too awkward for all of us).

Anyway, bad joke aside, Maine is apparently well known for its beautiful lighthouses, and this amazing one at Cape Elizabeth is just outside Portland about a 10 minute drive away.

We nailed the day for the perfect weather. Just look how blue that sky is. 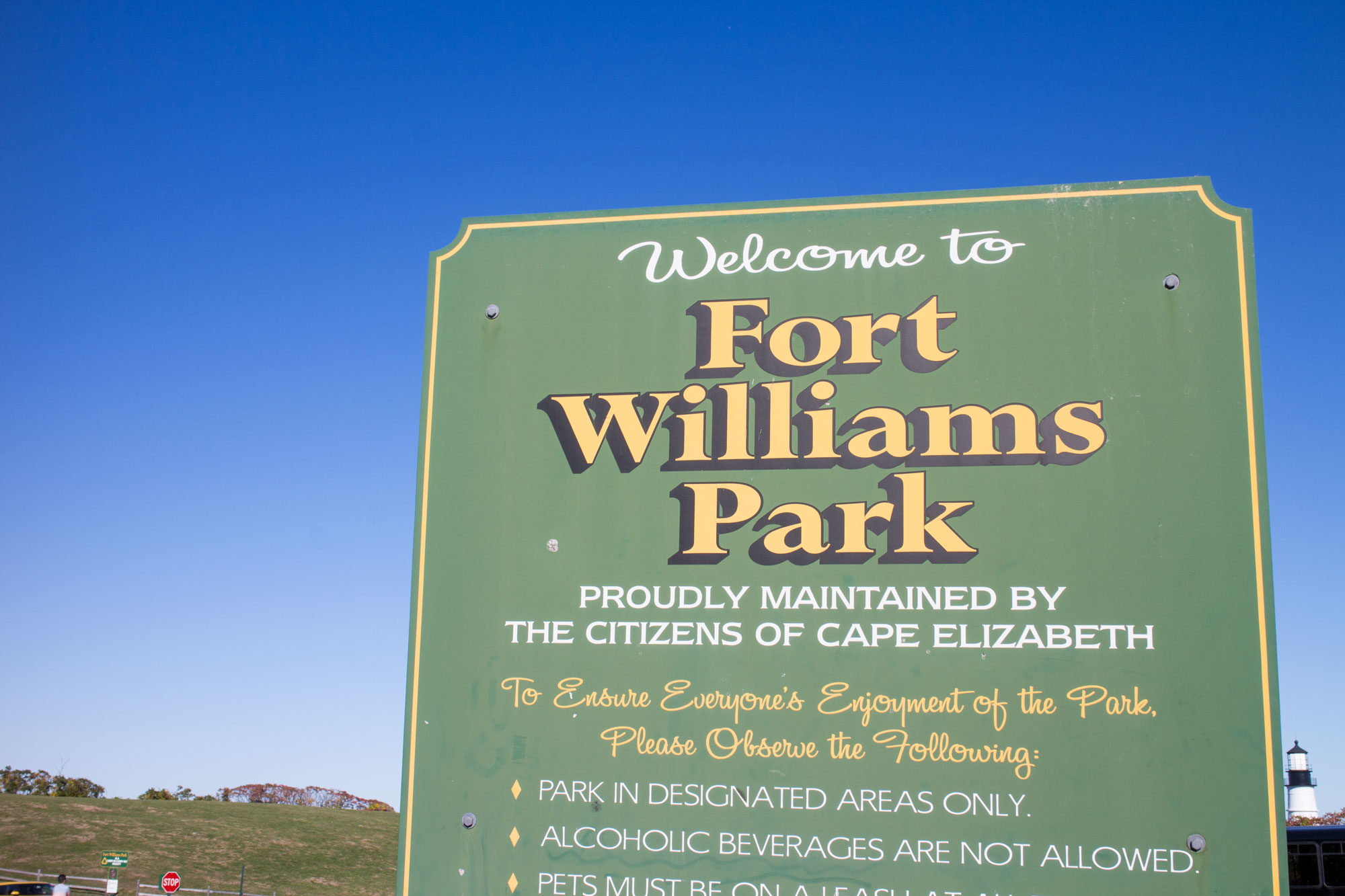 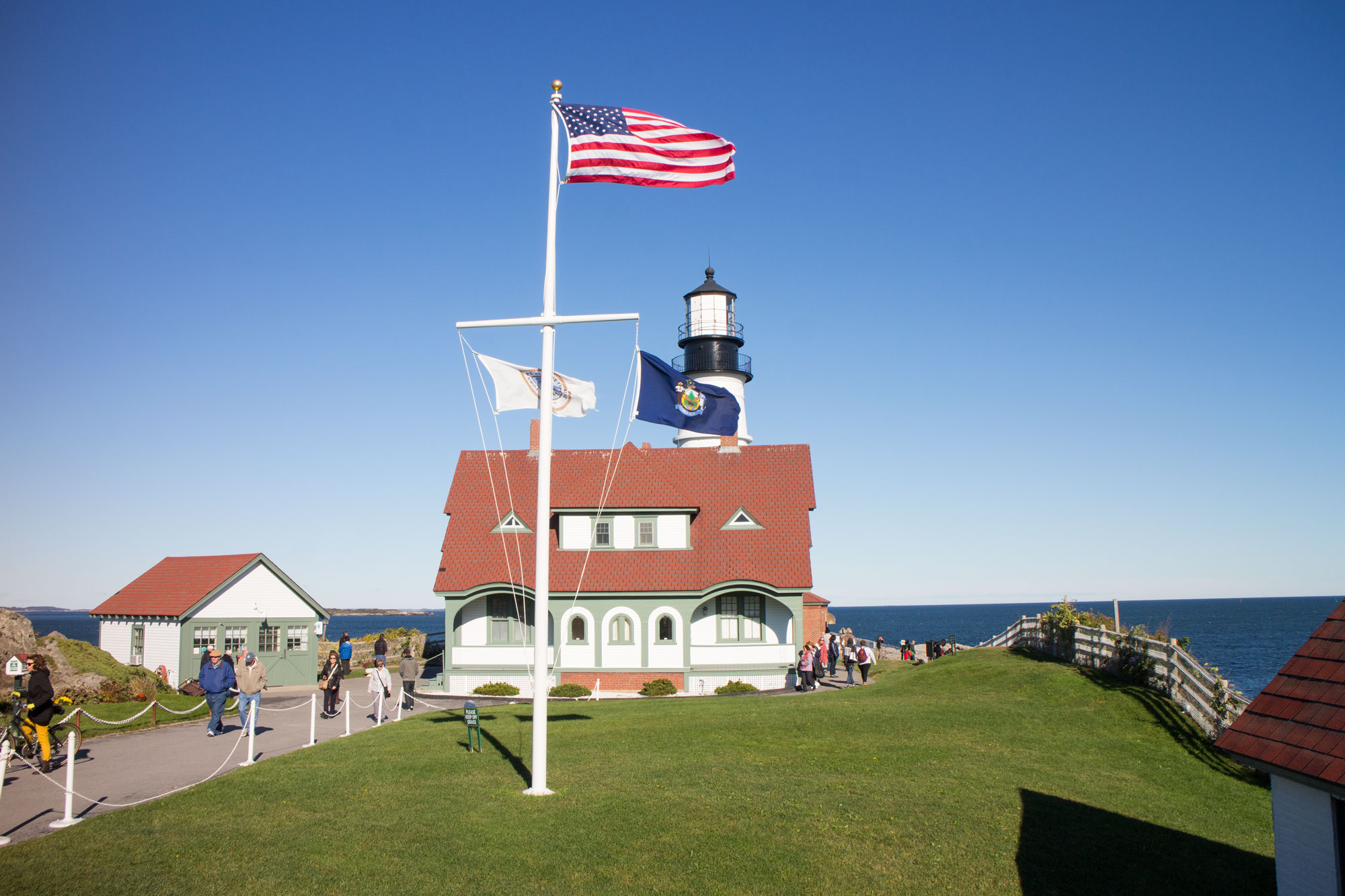 There is a museum/info centre that you can go into for a couple of dollars I think (mum and Ian did) but it’s just as nice to wander around the park area and just drink in the incredible scenery and that crisp sea air. 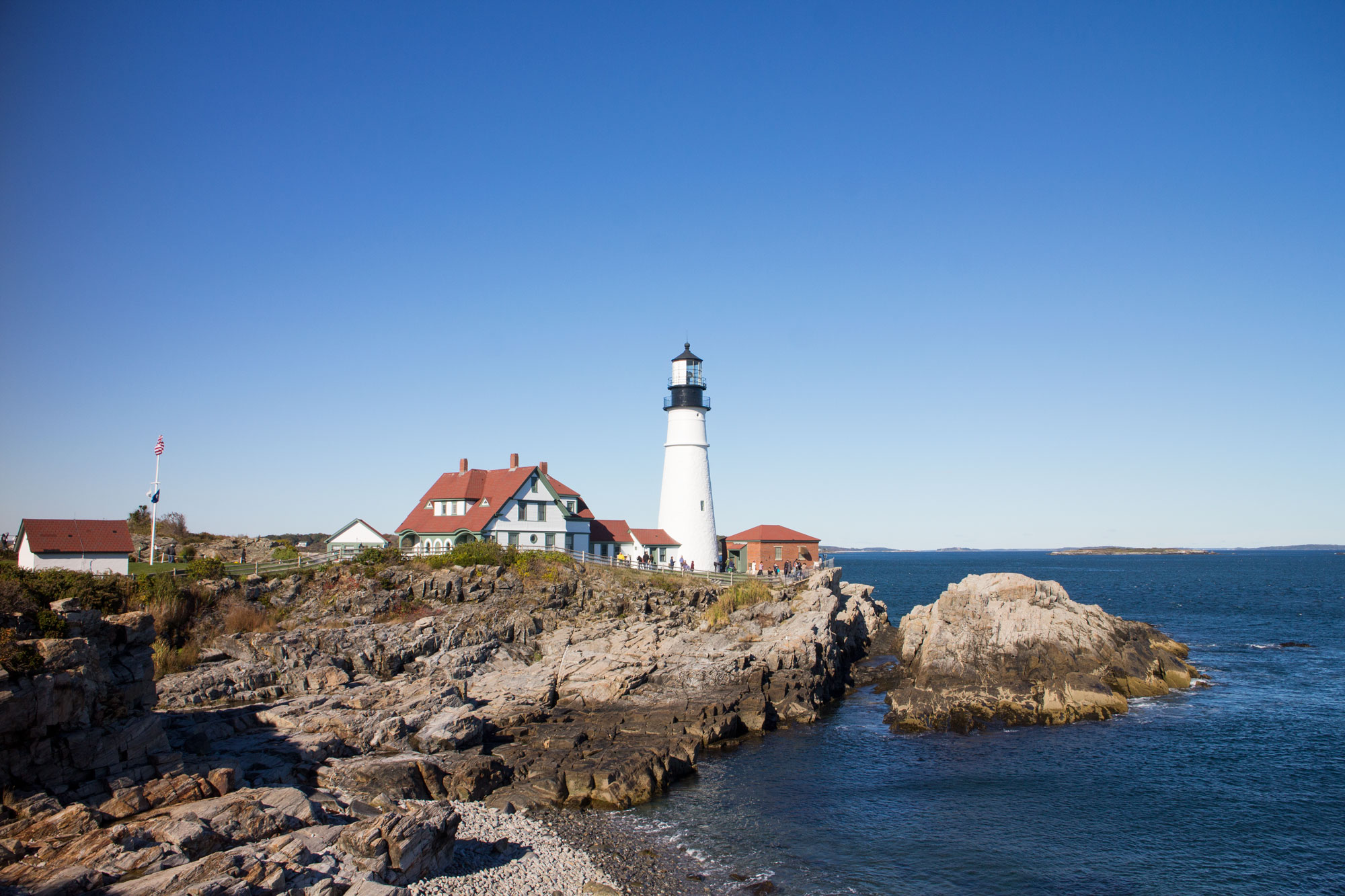 Have you ever been to Portland? Is there anything we missed that you would recommend? It’s definitely another place I want to go back to someday, and after this little sampler of Maine, I’d love to see some more of this beautiful state!

To see what else we got up to in Portland you can check out my vlog here.

In my next post we’ll be in the insanely beautiful and incredibly coloured town of North Conway, New Hampshire so make sure to check back soon for that.