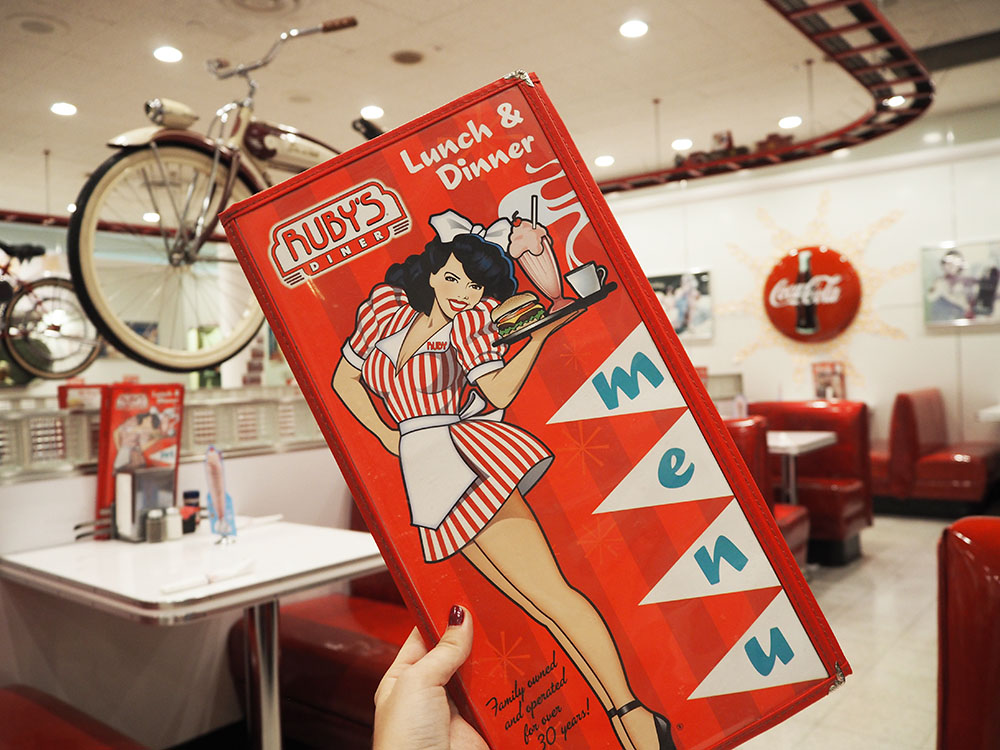 After leaving Santa Monica, we headed back inland to Palm Springs. We arrived in the early evening, but due to a problem with our room and having to faff about sorting that out we didn’t get much time to look around, but we did have time to make a stop at the diner across the road from our hotel, Rubys… 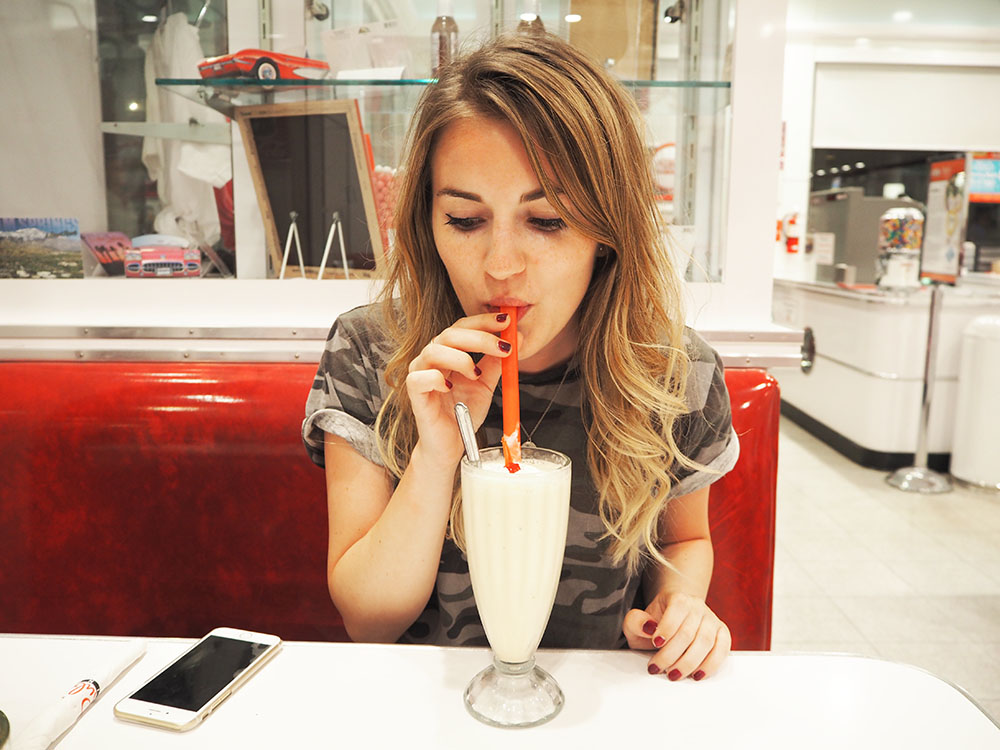 The meal at Ruby’s was a good’un, and I can hands down say the milkshake was the best I’ve ever had in my life. It was salted caramel flavour and I wish I had them on tap at home, complete heaven in your mouth! 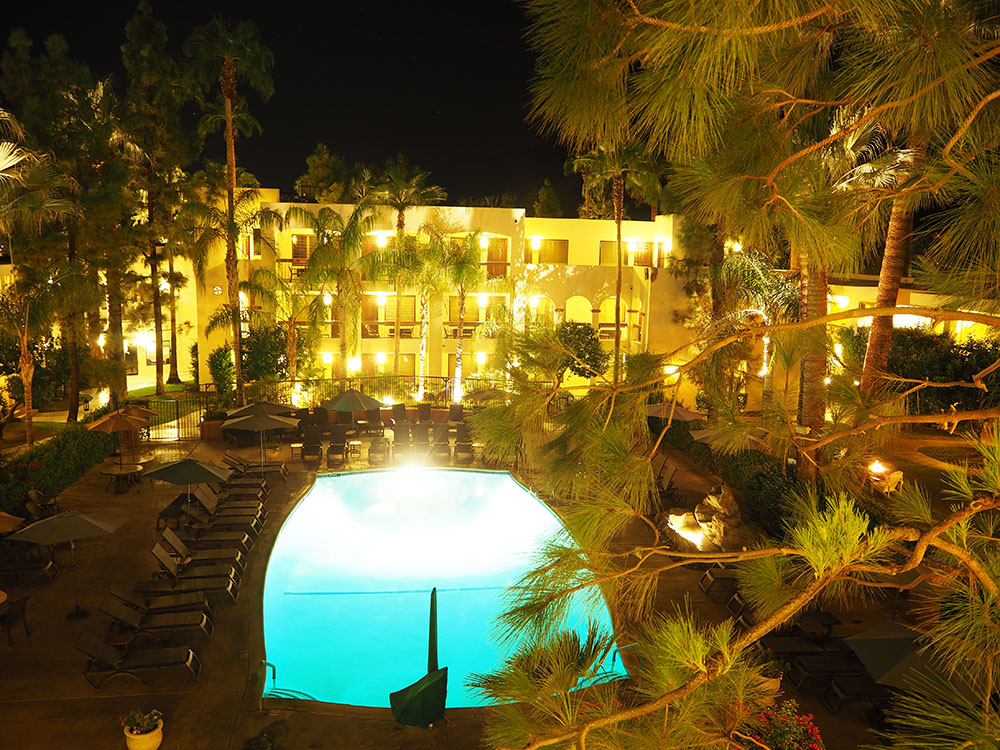 After finishing dinner we went back to the hotel because we were absolutely shattered. I forgot to mention that we had a slight car collision incident on the way to Palm Springs so we were completely drained and needed our beds sooner rather than later! But just before we went to bed I took a couple of snaps from our hotel room, we stayed at the Palm Mountain Resort and Spa in case you want to check it out 🙂 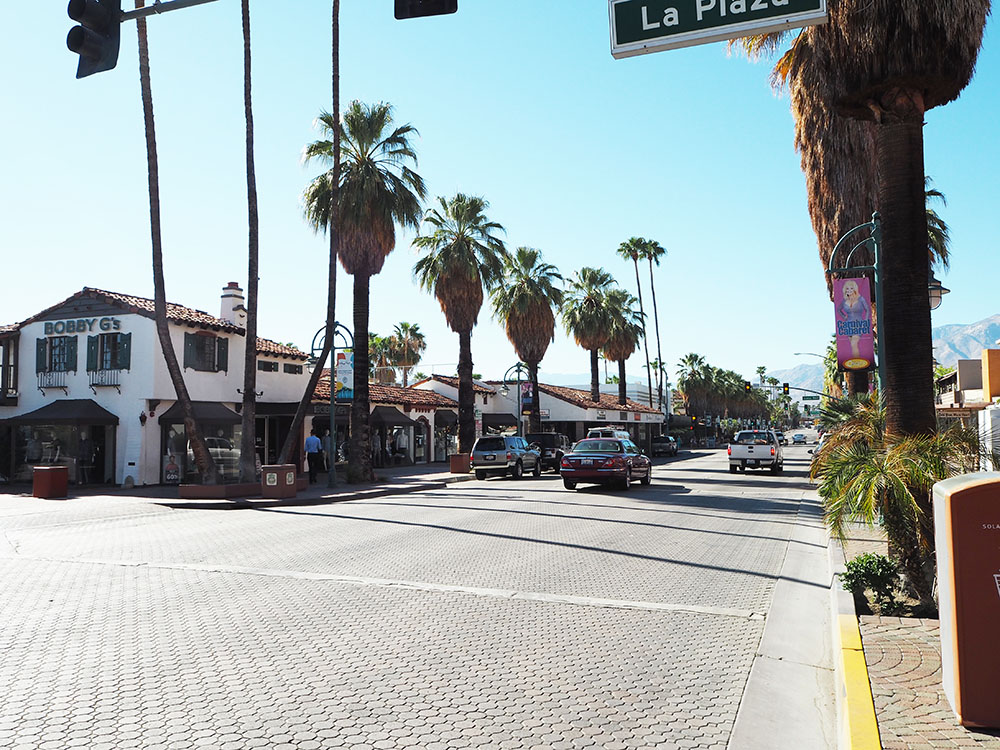 The next morning we didn’t have too much of a plan. The main attraction we wanted to see as it had been named as the top thing to do in Palm Springs was the aerial tramway. In absolute sod’s law fashion, as we were driving into Palm Springs the previous day I noticed a sign saying it was closed for maintenance on the week we were there, typical! So with that plan out of the window we were at a bit of a loss as of what to do.

To start off the day we had a quick bite to eat at Ruby’s diner again as our hotel gave us breakfast vouchers for it, and then had a short stroll along the main road that Ruby’s diner is situated on.

In the end we decided we hadn’t had too much chill time on the holiday so far so a day by the pool could be a very good idea. Especially in around 37 degree heat. So we settled in for a morning and early afternoon in our swimsuits catching a tan. 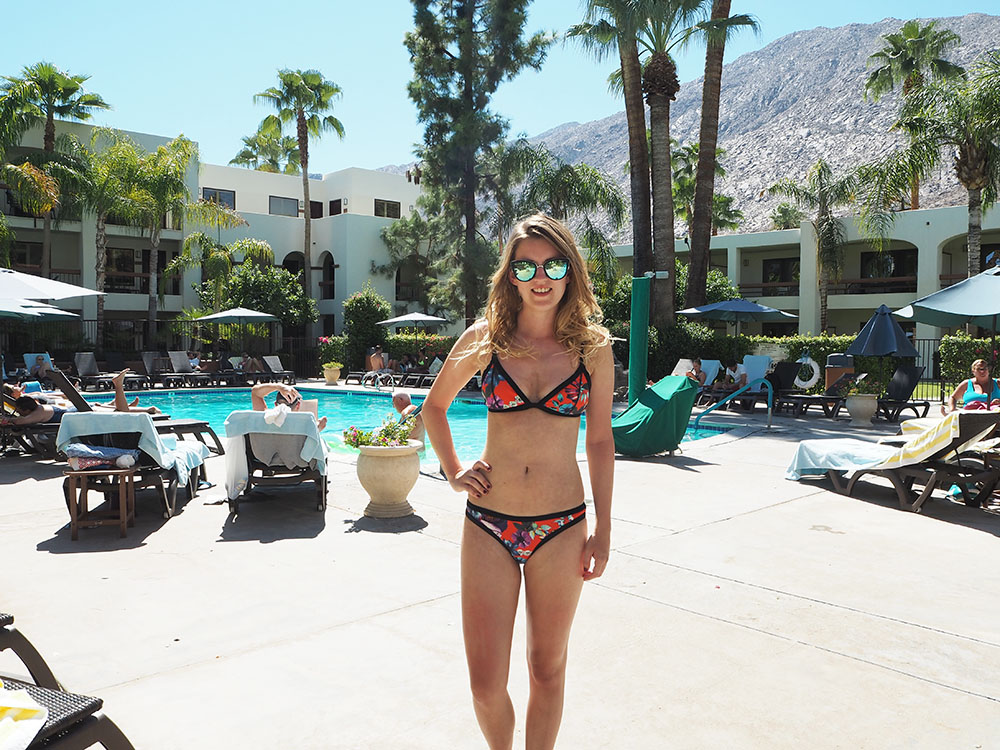 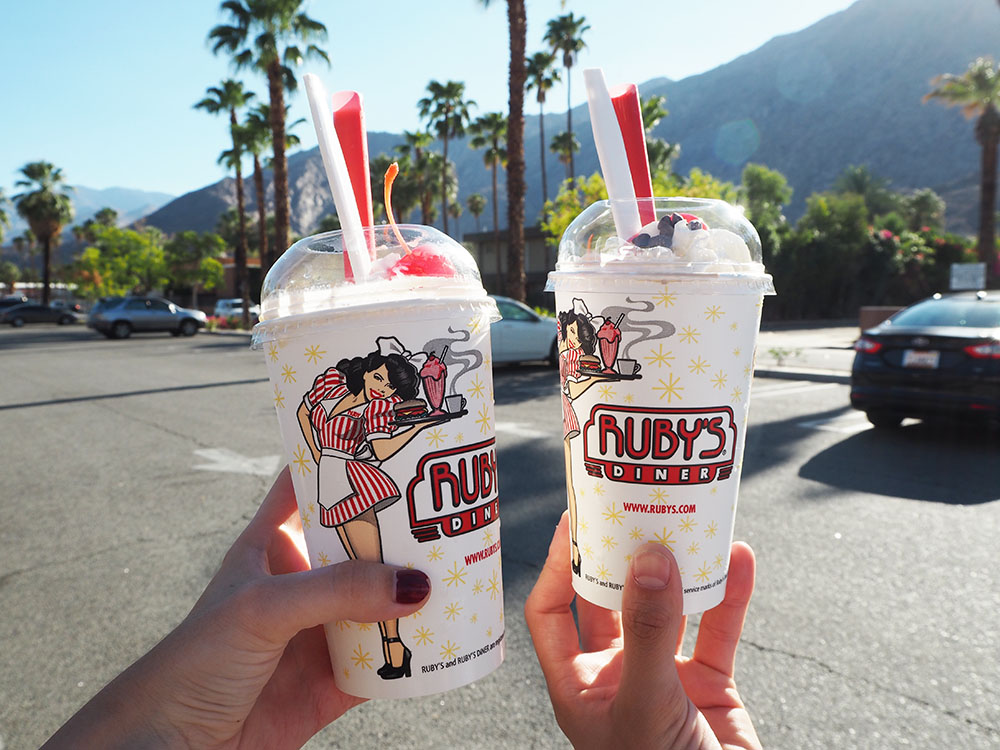 After we were suitably sunned we figured we would go and check out the local designer outlet. But not before stopping at Ruby’s to get a milkshake to go. It had to be done really didn’t it. 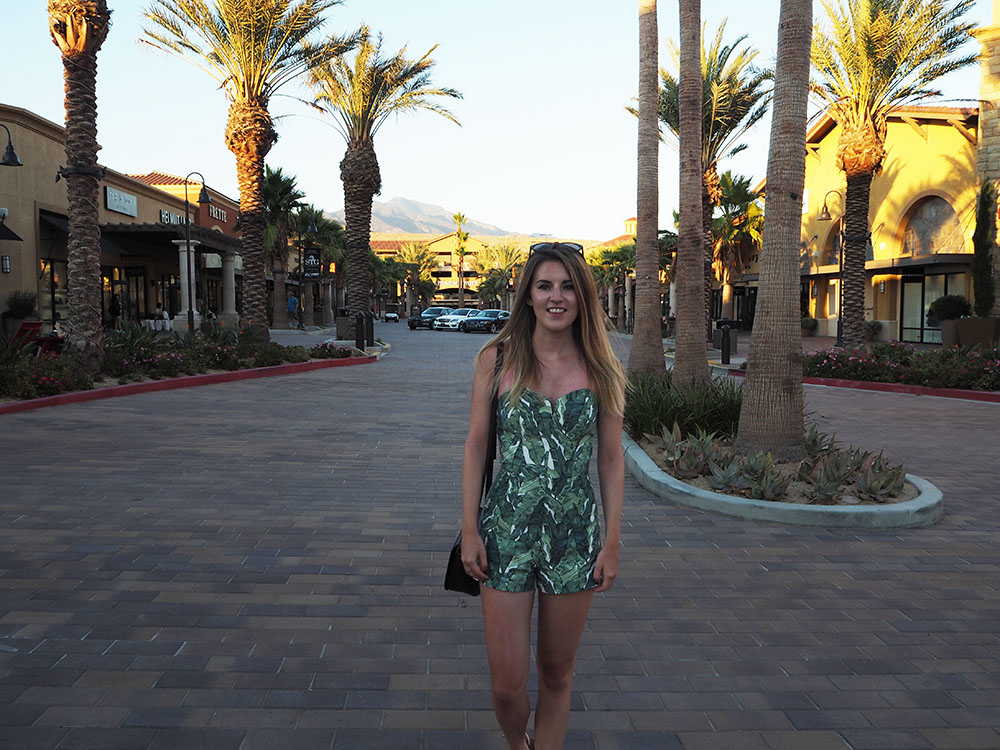 Wearing palm tree prints in Palm Springs because why not.

The outlet wasn’t actually that fruitful for us unfortunately. In Florida we spent loads at the outlet, but here not much took our fancy. And I for people that feel the cold like me, I just want to point out that it is considerably colder here than it is in the centre of Palm Springs, even though its only a 15 minute drive away. Madness! 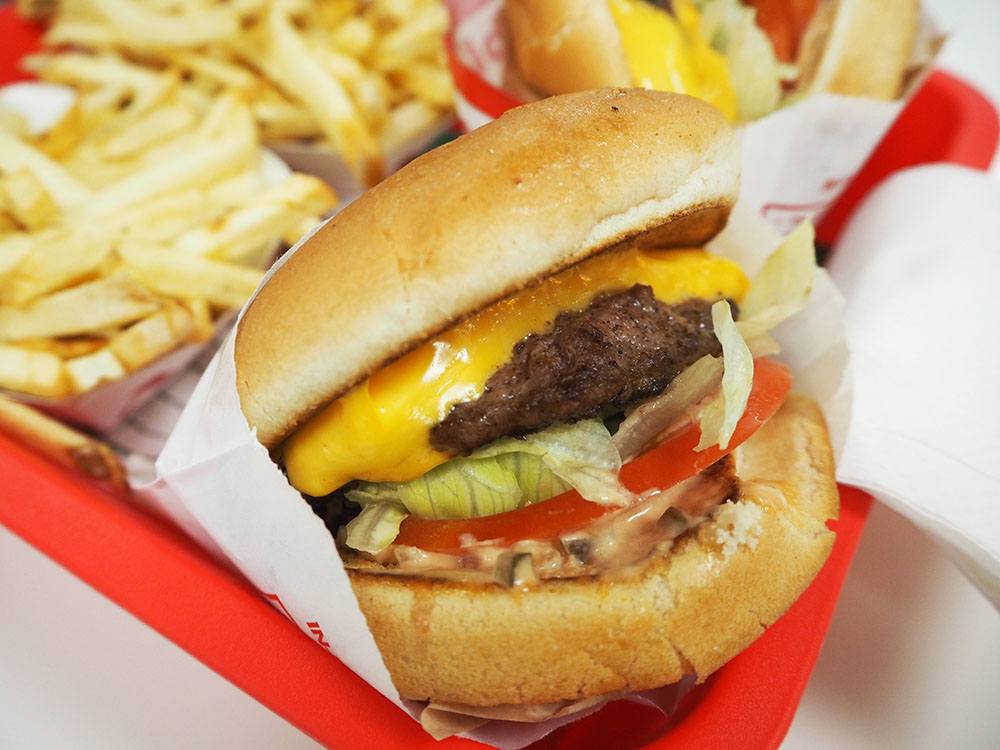 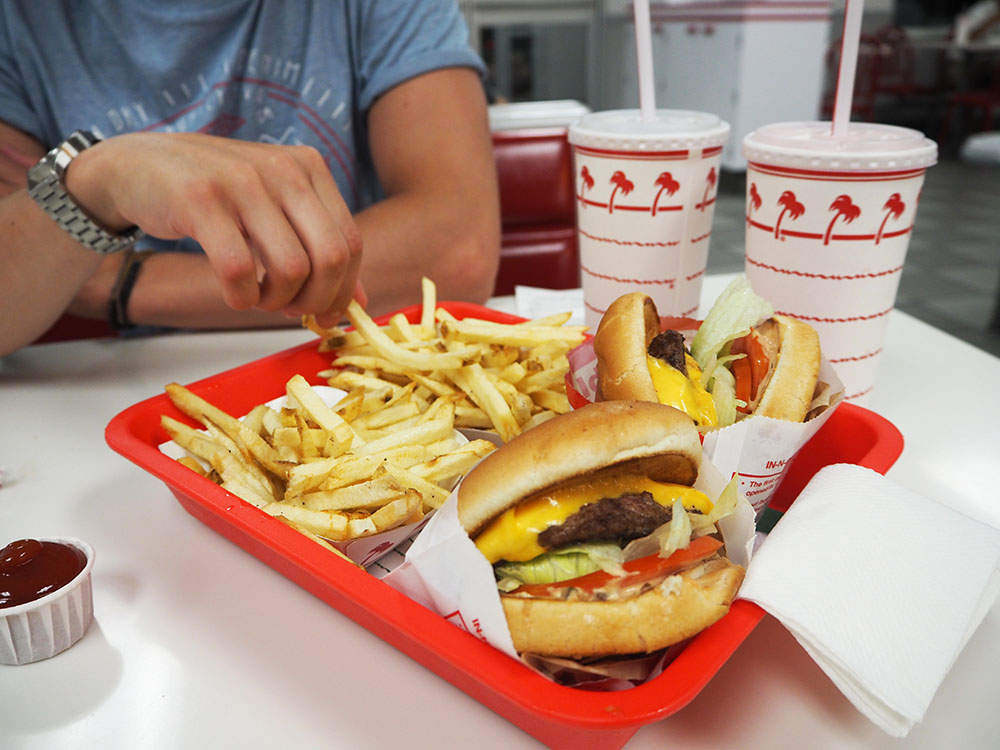 This was both of our first time eating at In-N-Out and I can confirm that it lived up to all expectations. I bladddy loved it!

And they have Pink Lemonade as a drink option, what more could you want! 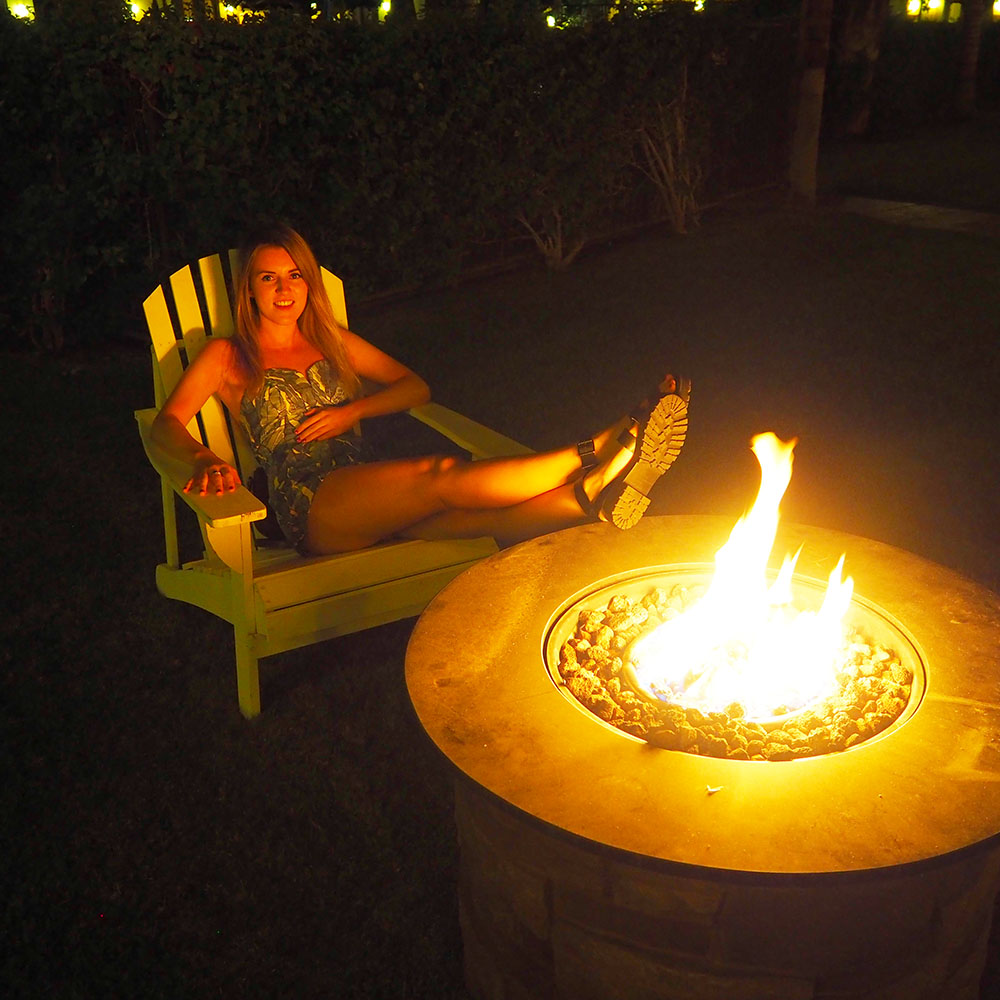 After driving back to the hotel we saw that there was actually a street fair going on right by the hotel that we remembered had been mentioned to us by the hotel staff. Unfortunately they were starting to pack up when we arrived so we only had a really short wander down the road. The street had been closed off to traffic and it was full of little stalls selling art, craft, clothes and all that jazz. I didn’t get any pictures but there should be some footage in my vlog when that finally goes up.

When we got back to the hotel we noticed that they had two little fire pits alight with chairs around them, how awesome is that!

So we nabbed ourselves two chairs and settled in for some time by the fire. Luke spent ages taking photos and I did a little reading. I loved this idea of having somewhere like this at the hotel that people could sit around at night. Another group sat around chatting and drinking beers, which just made me think it’s nice to have a place to chill out and chat that isn’t the bar or reception. 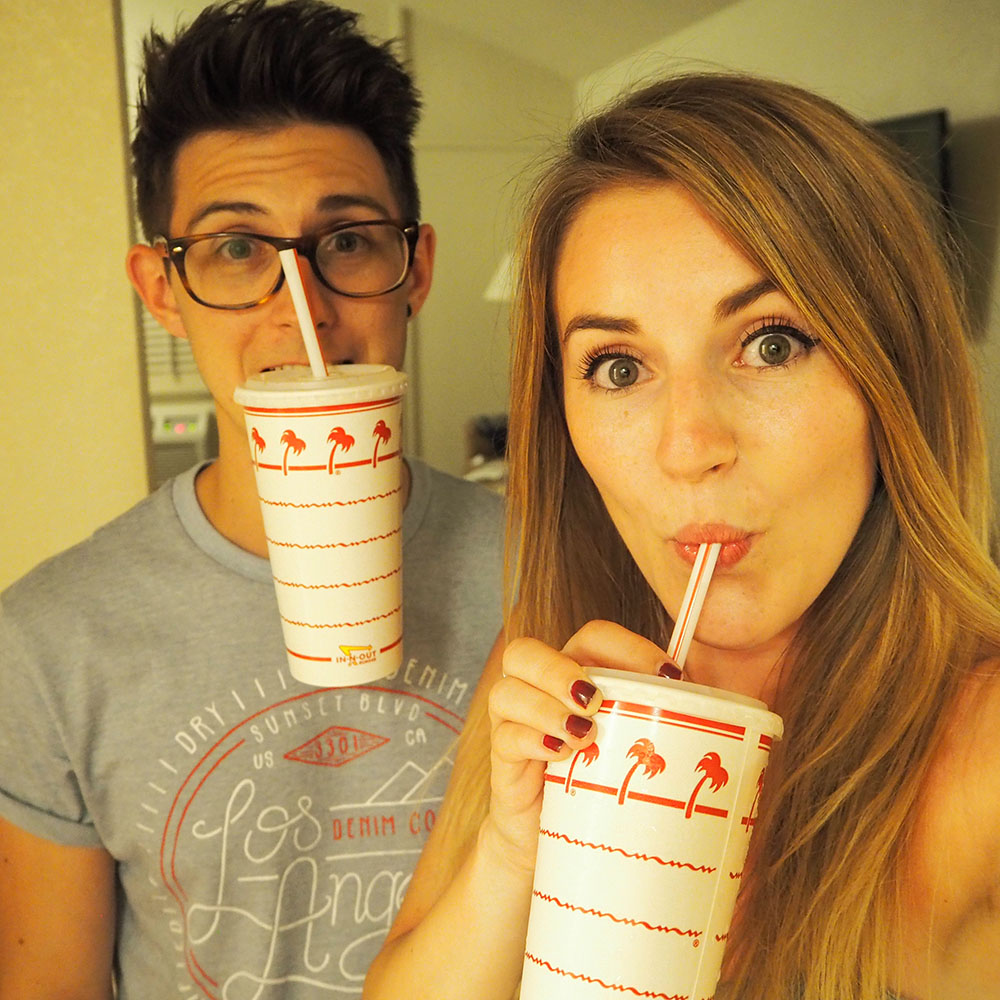 Although we hadn’t got up to much on our first day in Palm Springs it was nice to have a good ol’ chill out day!