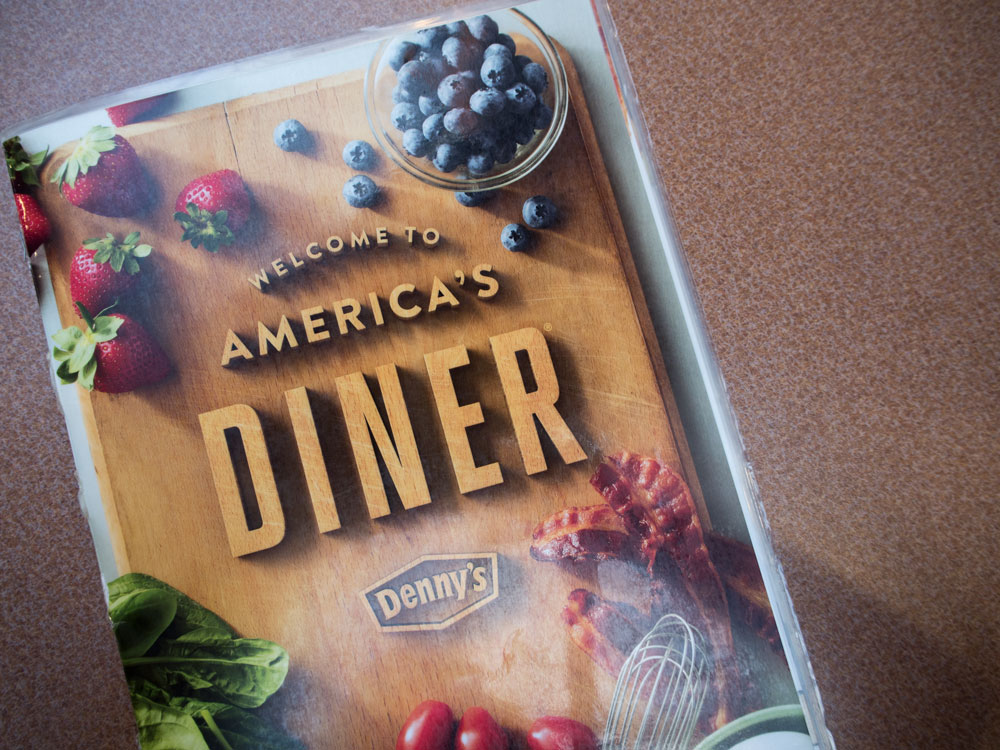 When we arrived at our hotel in San Francisco we were excited to see that there was a 24hr Dennys on the ground floor of it. Luke was desperate to go to Dennys again as it’s where he went several times when he went to Florida when he was 8, so it was a ‘must-do’ on our trip, and super convenient that it was in our hotel. The first morning we headed down to start our day with a hefty breakfast. 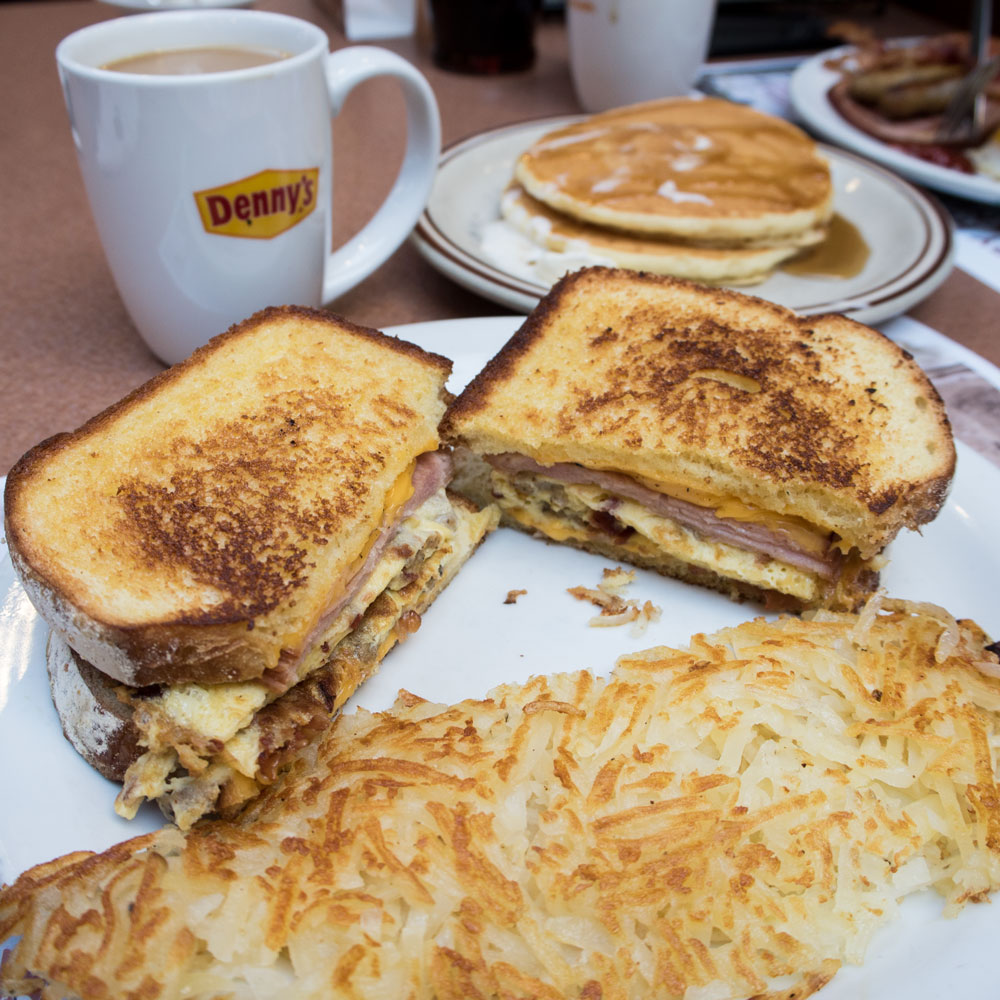 I went for The Grand Slamwich, which consists of two scrambled eggs, crumbled sausage, bacon, shaved ham and American cheese on potato bread grilled with a maple spice spread. Served with hash browns. Basically a heart attack on a plate, safe to say I didn’t finish it all. Luke went for more of a traditional eggs, bacon, sausage type breakfast, with pancakes. Suitably stuffed we headed out to start our first full day in the wonderful San Francisco. 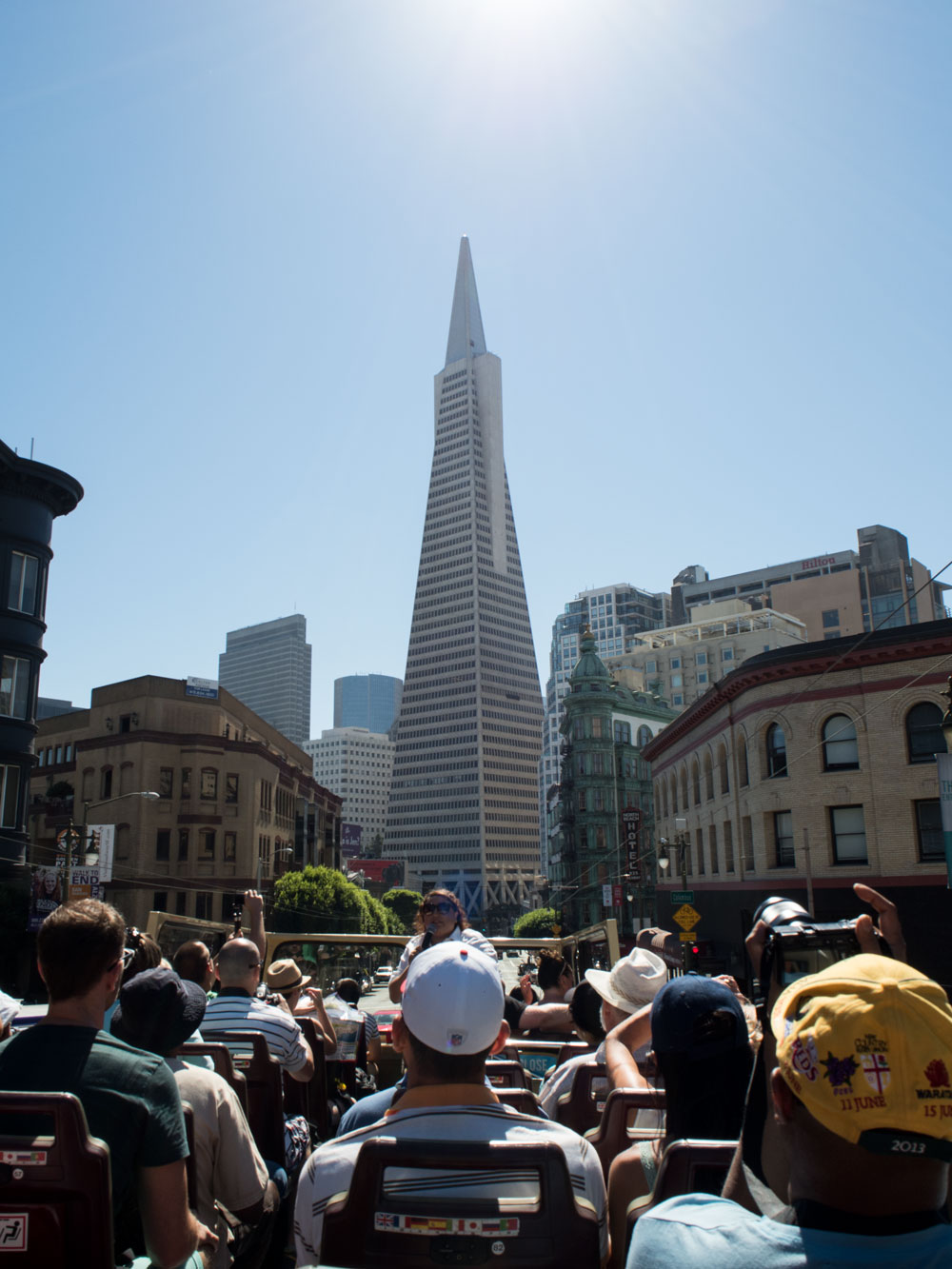 One of the easiest ways to navigate a city (and a way I really enjoy) is to get the Hop On Hop Off tour bus. Again our hotel was in the perfect location with the first stop on the bus being about a 5 minute walk away. We booked most of our trips through Virgin before we left the UK so we just had to get to the office and pick up our tickets. The bus tour company we were on was the Big Bus Tour. On the first trip round we had a tour guide on the bus which I definitely think is better than the ones that just have a headphone track for you to listen to.

When I go on these types of tours (I’ve been on a Paris one three times, New York, Barcelona, London and Rome) I like to take the tour round once, figure out which stops I want to get off at and then get off on the second time round. So we started off with a full loop around the city, basking in the glorious heatwave sun. 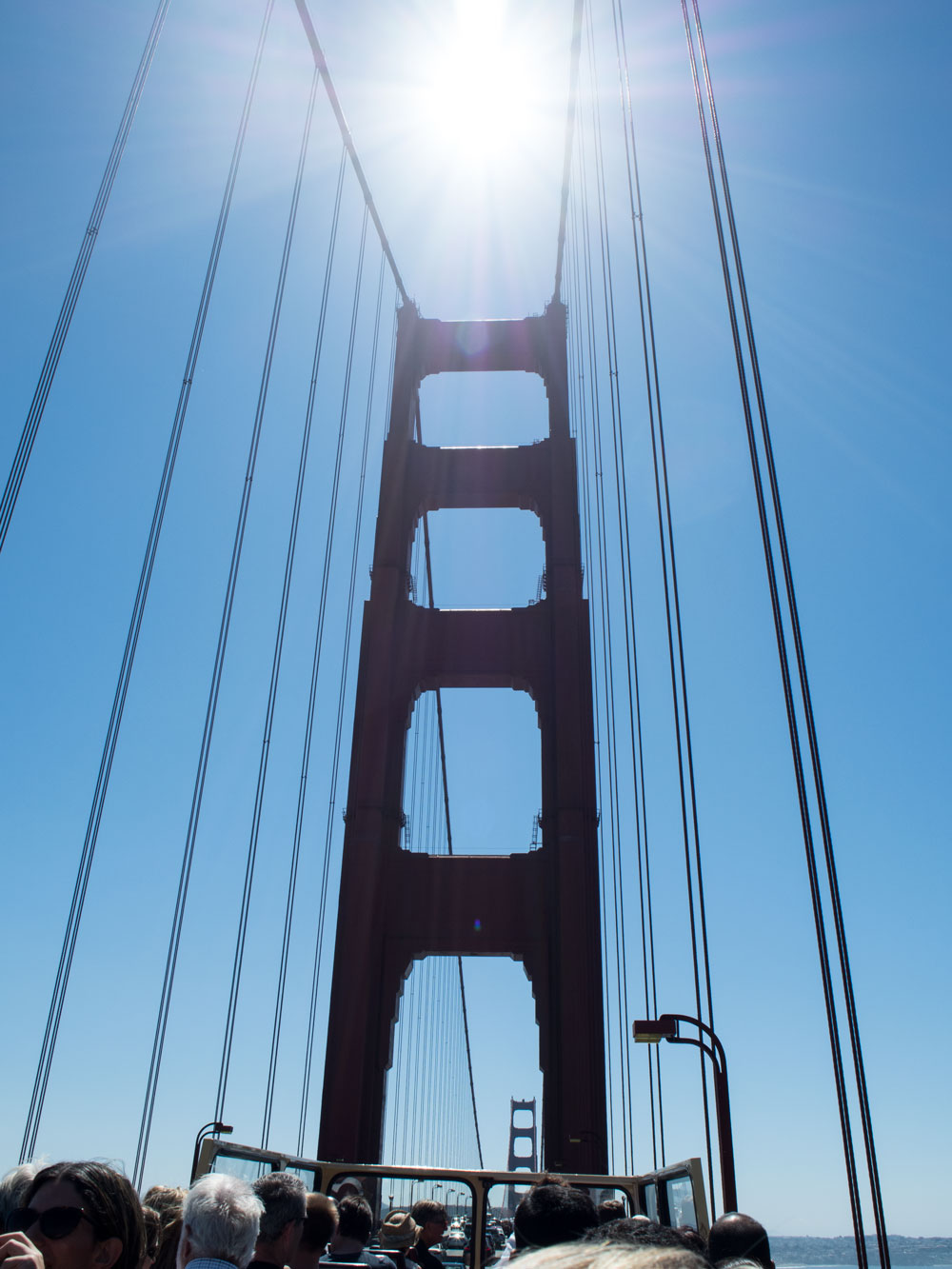 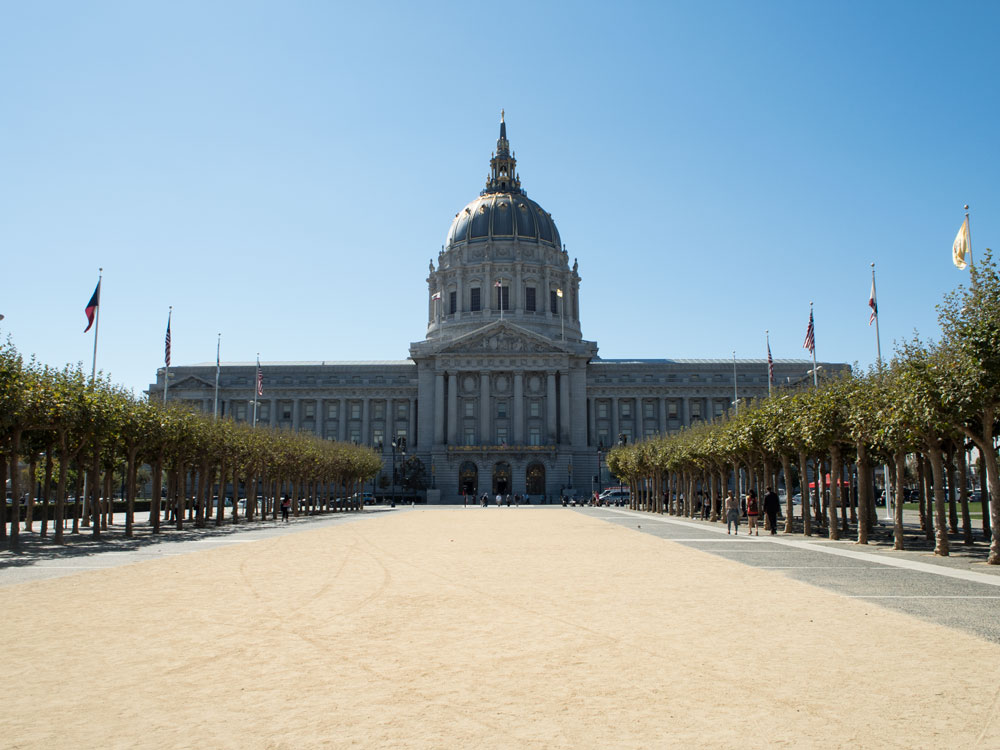 Once we had done the loop once we decided to get out first at the City Hall stop. It’s a beautiful building and we even spotted some people coming out that must have just been married there! 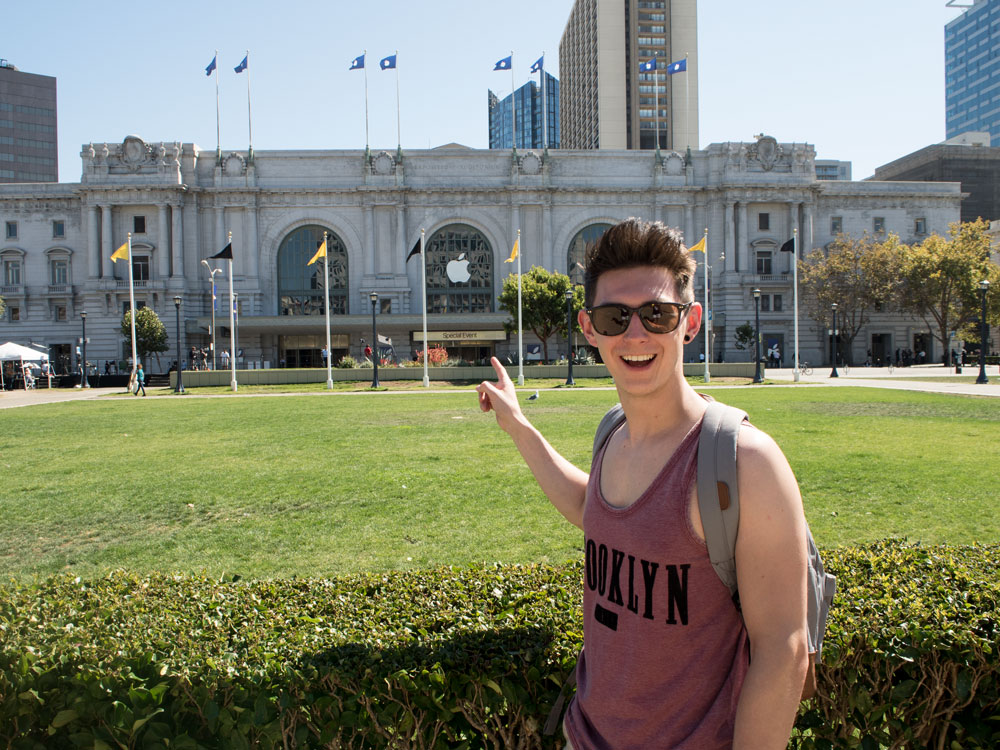 On the first loop round we had noticed the Apple store by City Hall from the bus, but when we got out for a wander we noticed several news vans parked up. It so happened that we were there on the day of the Apple Keynote event, so as Luke is a bit of an Apple geek we obviously had to take a few snaps! 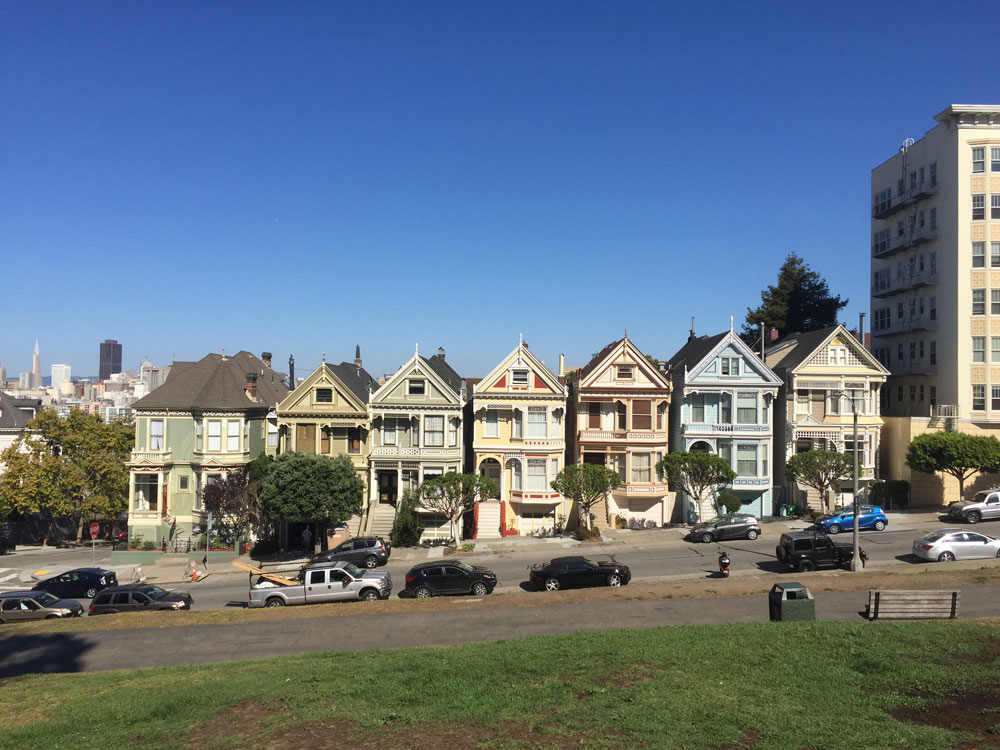 After wandering around and taking all our photos there, we hopped back on the bus. The next stop we decided to get off at was for the Painted Ladies, the famous row of Victorian houses. Even though I recognised these once we got there, I didn’t actually know that they were called the Painted Ladies, we thought we were looking for a mural! Doh! I think my favourite is the blue one, god knows how much it would actually cost to live in one! 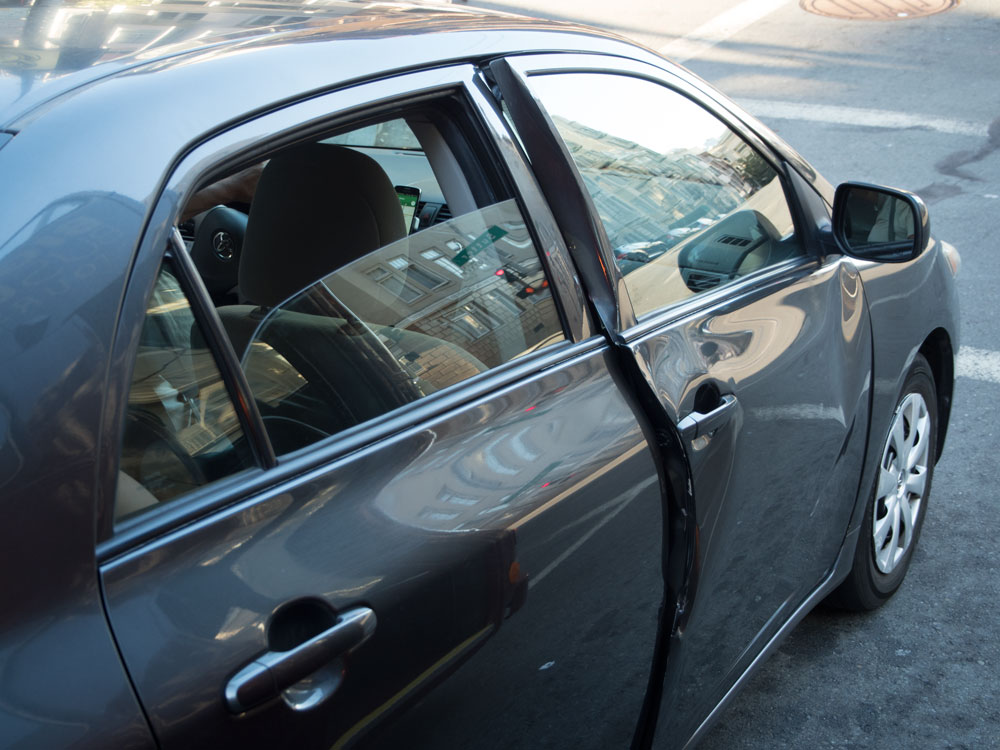 Again we wandered back to the bus stop and carried on our journey. We were then involved in a bit of a road traffic incident on the bus! The car in the picture above was an Uber type of taxi and the passenger decided to open the door as our bus came past, which then jammed in our wheel arch. We then sat there for 20mins or so not being allowed off the bus while our driver argued with the un-insured car driver. Nothing like a bit of drama to start off our time in San Francisco! 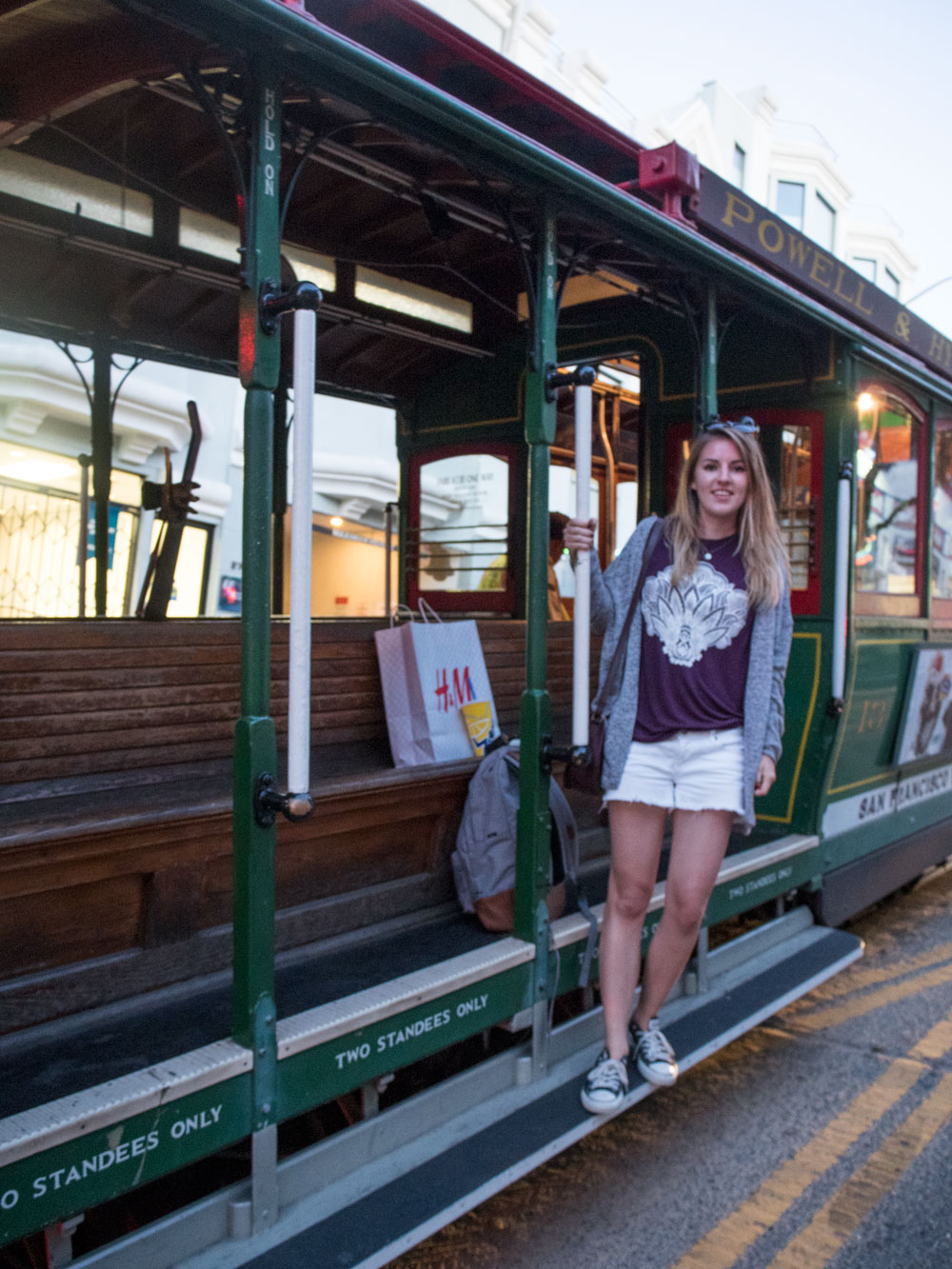 After the bus finally being able to detach itself from the car we carried on our journey and decided to get off at Union Square. After a little wander around I suggested we get on the famous cable cars back to our hotel as I knew it would drop us off just around the corner from the hotel thanks to my previous trip to San Francisco. Luke did the classic hanging off the side but I stay seated until it had stopped for us to take a photo. I’m such a wuss! 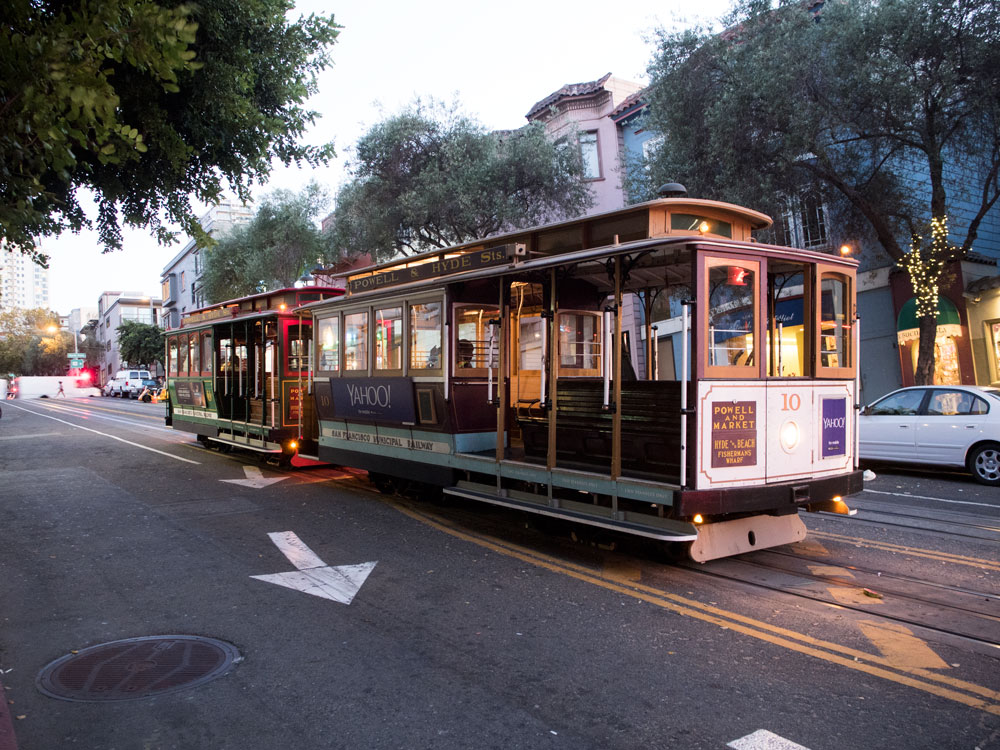 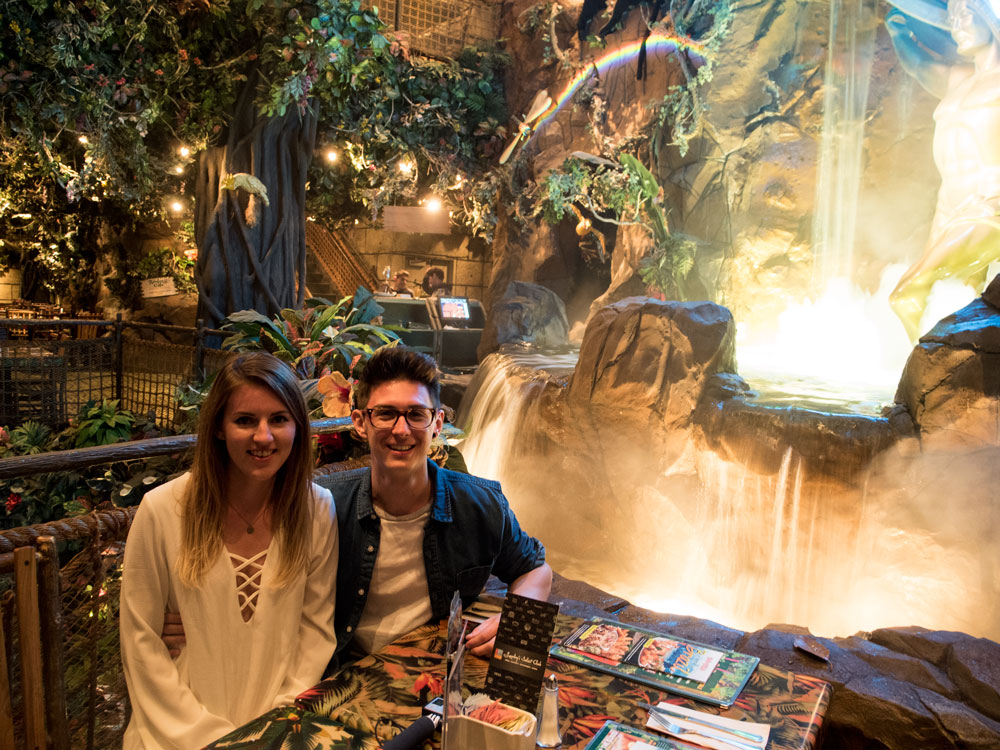 For our first proper evening meal I was desperate to go to the Rainforest Cafe as it’s the first one I ever went to and I’m a big fan of the ol’ theme restaurants. I think the waiter took a bit of a shine to me and Luke because he sat us in the prime seats right next to the waterfall! Even if we did get a bit water misted! 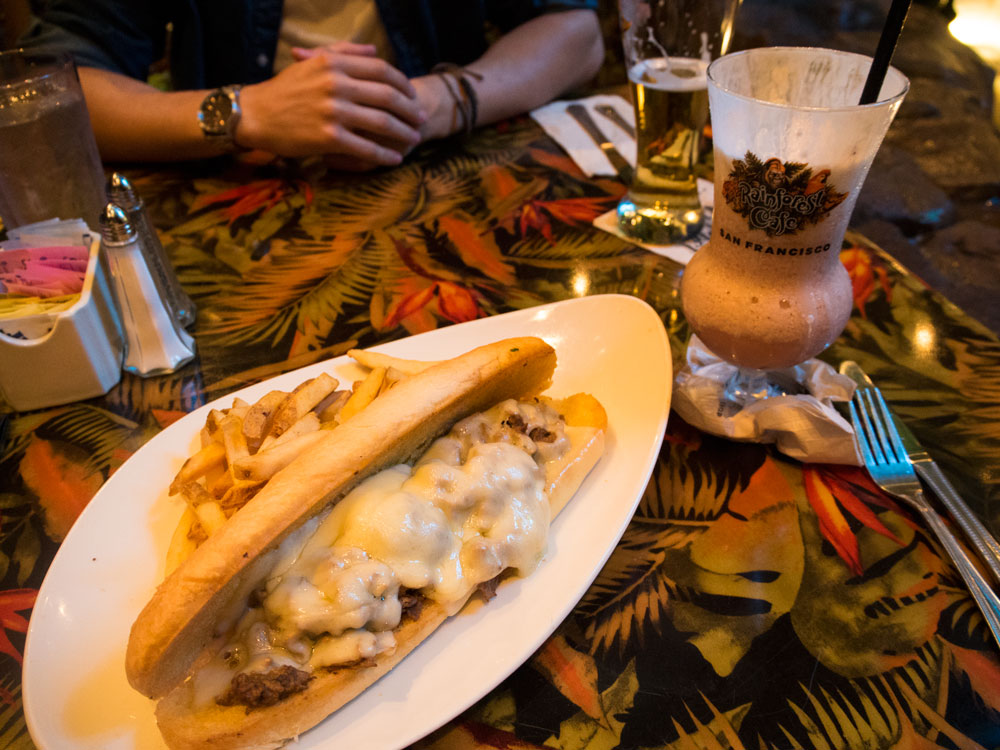 Both of us opted for the Philly Cheese Steaks and I can tell you it was deeee-lish! This meal was probably our favourite of the holiday because we had it in several different places, I think this Rainforest Cafe one was one of the best though. 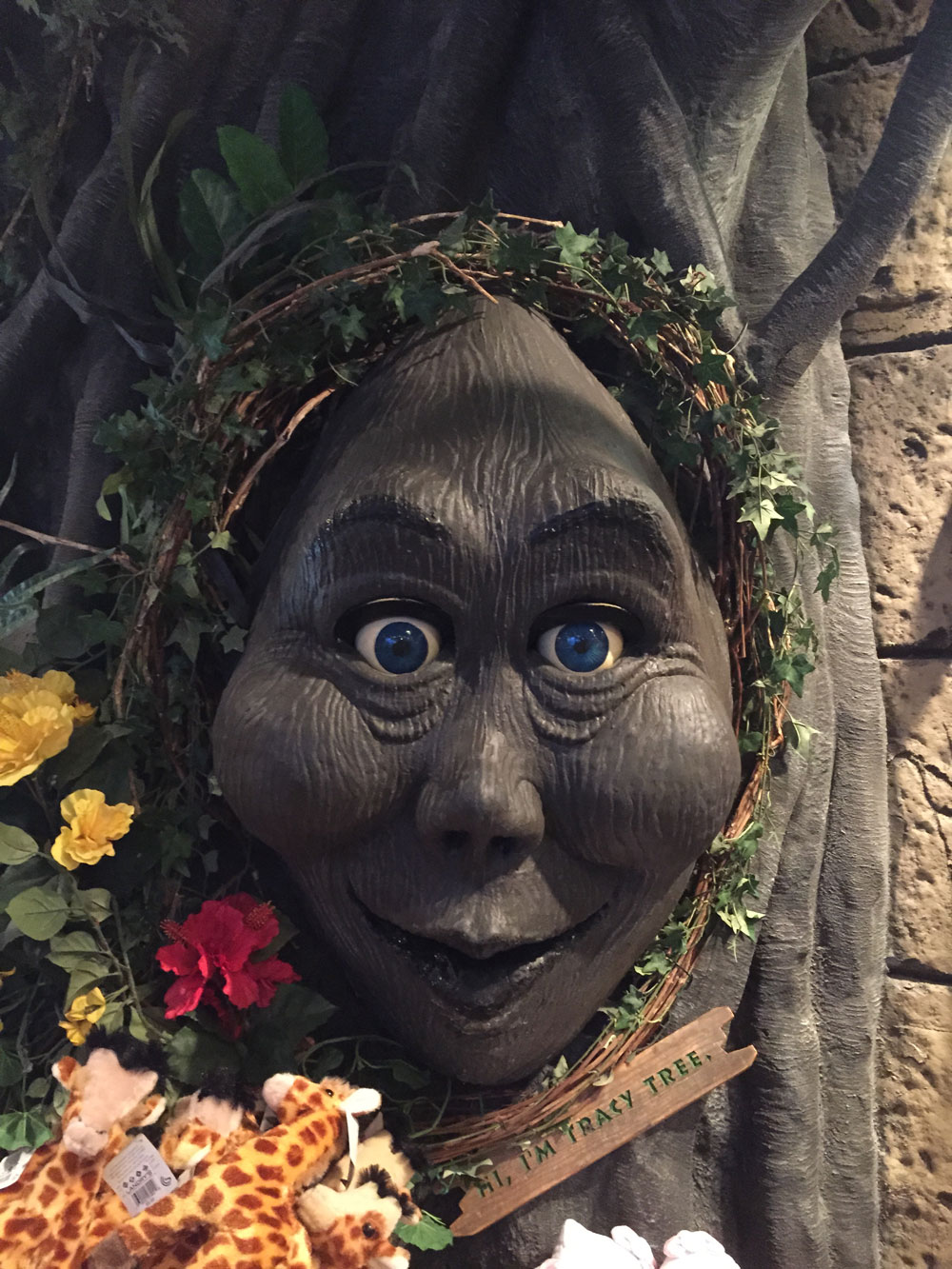 After we finished dinner we made a quick stop off to see Tracy Tree! 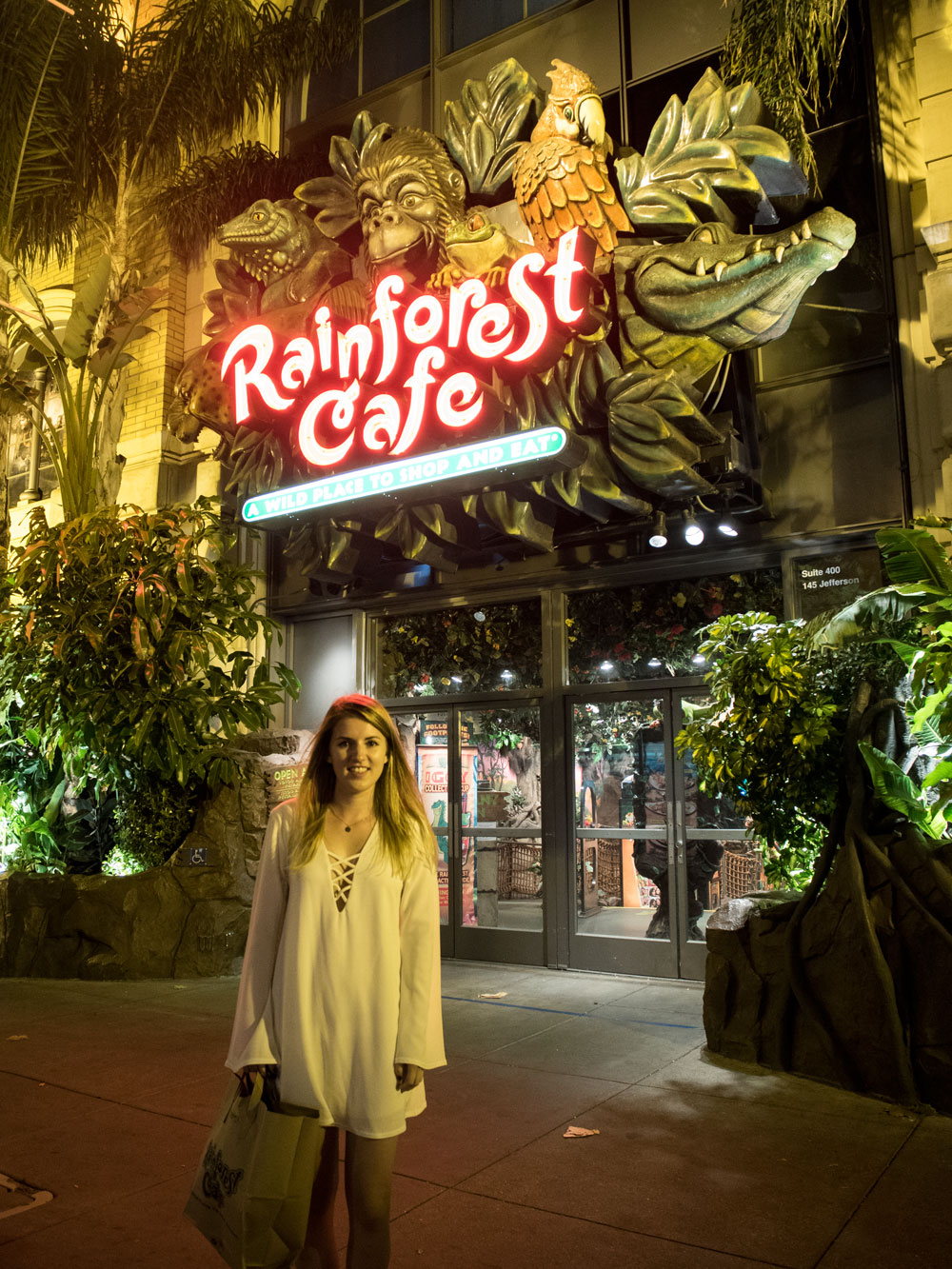 All in all a great first day in San Francisco!