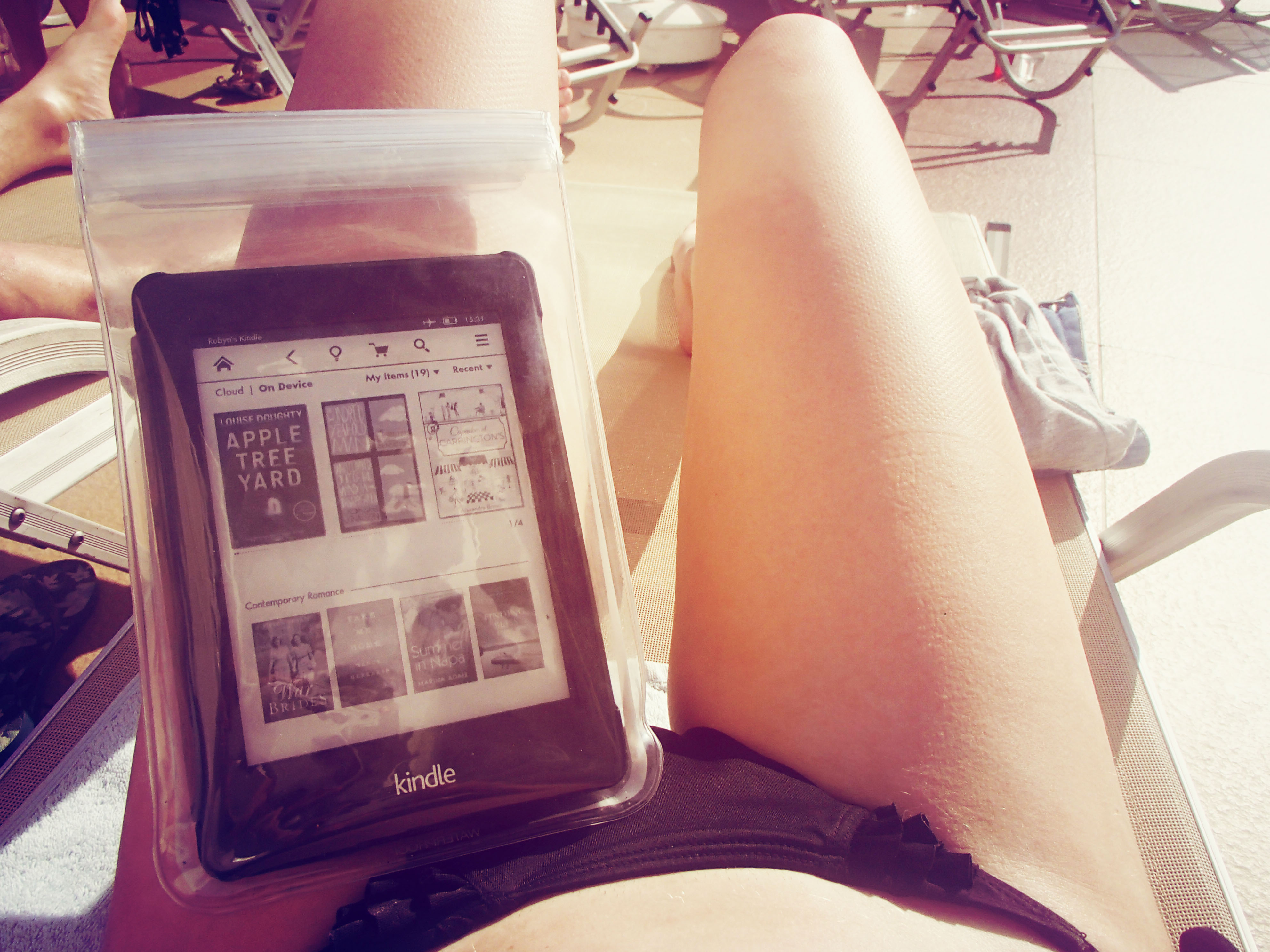 Holidays are my favourite time for reading, I can’t sit on a sunbed doing nothing all day so I read most of the day, every day I’m by the pool. Usually books are destroyed by the pool getting all wet and suncreamy, and they weigh loads in your bag. Luckily for me, this year I had my lovely kindle my mum bought me at the start of the year. Armed with my mums waterproof kindle case I read a couple of good books this holiday so I thought I would do a little post about them in case you’re looking for any reads this year!

I downloaded this book after seeing it on WHSmith top books charts and kindle best sellers lists and thought it might be a good bet. I was really intrigued by the blurb because recently I have been loving reading more mystery and crime books rather than just girly trash (not that I don’t love girly trash, Jackie Collins is one of my firm faves). The premise of the book is that a woman has an affair which finds her in line for a murder charge after things go wrong and she finds herself in a situation she can’t get out of. I really quite enjoyed reading this, there were quite a few twists and turns that I didn’t expect and it was a good read through to the end. The part of the book that I didn’t expect was the romantic nature of it, from the main character Yvonne’s perspective towards the man she was having an affair with, I think this contributed really well to showing how the story progressed like it did. I don’t want to reveal too much about the plot in case you want to read it too! But overall I do think it was a really good read and I would recommend it if you like crime and romance (if you could call it that) books, the end was satisfying and I thought it was a pretty good holiday read.

On the kindle monthly deals list was a book called The Little Old Lady Who Broke All The Rules, I had a little read of the description for it and wasn’t sure whether to get it or not, then I noticed in the related books section ‘The Hundred-Year-Old Man Who Climbed Out Of The Window And Disappeared‘. I’ve been seeing movie posters around a lot for this book and had seen it a while ago in book shops and not taken much notice of it other than thinking it had quite a nice cover. But when it popped up in suggested and was quite a good price (only £2.99) I had a look at a few reviews and decided it might be a good contrast to the serious crime subject of Apple Tree Yard. The basic storyline of the book is pretty much explained in the title, a 100 year old man escapes his nursing home and the book follows his adventures. When I started reading this it was not at all like I thought it would be. The book intermixes the present day life of the hundred year old man, along with flashbacks of all his past adventures. Now I was expecting this book to be hilarious because all the reviews said it was so funny, but I didn’t laugh out loud once while reading this, and trust me, I’m a LOL-er! The story was quite good and kept me interested until the end, the only quibble I had with it that the flashbacks were so unbelievable that I thought I would get to the end and find out that it was all his imagination or something. Nonetheless this didn’t happen and it turned out it was just written extravagantly and as if these crazy adventures could happen to one person. It was an enjoyable book and great for an easy holiday read, so if you’re not expecting a LOL-a-minute then I think this is a good option.

Cupcakes At Carringtons – by Alexandra Brown

This was the one classic chick-lit type book I decided to get, just in case all the other books failed and I just wanted something dead easy to read. It came up in my Amazon suggestions I think and was only £1.99. It really is a classic chick lit book with some romance and other girly bits and bobs thrown in, and being set in a department store it has a good backdrop for your imagination. Is it just me that needs a good setting to imagine? Its not on a Jackie Collins scale of chick lit, with no extremely raunchy sections, just in case thats not your sort of thing. It focuses on the main character Georgie and her job at a seaside department store where she works in the handbags and accessories department. The main premise of the book is that her job is in jeopardy after the recession hits and a outside consultant is brought in to mix things up, along with romance, friendship and family issues, its an all-round chick lit book perfect for poolside reading. The only thing that I didn’t like about this book were the deliberate references to popular culture, such as Twitter, I felt like they were planted just to make the book ‘cool’ and relevant. I’m probably nit-picking, but it just bugged me a bit. I did really enjoy it and would probably read the other books in the series, I think there’s 2 others so far. If you like girly books about romance and shopping then this is probably a winner for you.
7/10

The Cuckoo’s Calling – by Robert Galbraith
I bought this back in April and just haven’t gotten round to reading it until now. I kept seeing it in WHSmith in the top books sections and saw that it was J.K Rowling under a pseudonym which really intrigued me, so on a whim I bought it on my kindle but didn’t start reading it. When I finished the other three books on holiday I was considering buying another book because I still had a few days of the holiday left and I couldn’t just sit there and twiddle my thumbs for 2 or 3 days by the pool, or even god forbid if we had a plane delay. But just before I bought another one I thought I’d double check what I had on my kindle and realised I had this still to read so decided to give it a go. I’m only a third of the way through but already I am hooked! I wish I had read this first so I would have had time to finish it quickly! I don’t know why, maybe because of the cover, but I expected this to be set in the past, I was pleasantly surprised that its not and is a really engaging and intriguing crime and mystery novel set in the present day. The book is about a private detective (Cormoran Strike) and his latest case to solve about the death of a famous model. I don’t know whats going to happen in the rest of the book but what I can say is that its really really good so far. Its really well written and interesting, the characters are great and relatable, and the story isn’t too easy to guess where its going next. I would definitely recommend this if you like mystery and crime novels, I can’t wait to find out the ending and I really hope there are more in the series!
9/10

So there are my holiday reads! A bit of a different post from me but I really love reading on holiday so if anyone else is like me then I thought it could be nice to share what I enjoyed reading! Let me know if theres any books you’ve loved recently that you’d recommend!
Hope you’ve had a good weekend!

p.s. If you read my last post then you will realise that I didn’t blog at all whilst on holiday, it was too much effort to blog on my iPad, and to convince the boy to take enough photos for me to choose from, and I didn’t have my DLSR camera to take good photos with, so all in all I failed. But I am back now and have taken quite a few outfit photos this weekend and have some holiday posts lined up so I will be back on blogging form this week!