I feel like I haven’t watched a proper film in ages and I haven’t done a film of the week for ages, probably down to deadlines and pure laziness. After thinking about it, I’ve decided instead of watching films for fashion inspiration, I want to watch a new film every week. Just to broaden my horizons a bit and see some different films. So that means something I’ve never seen before, and not necessarily a new film out. So here is my first one 🙂 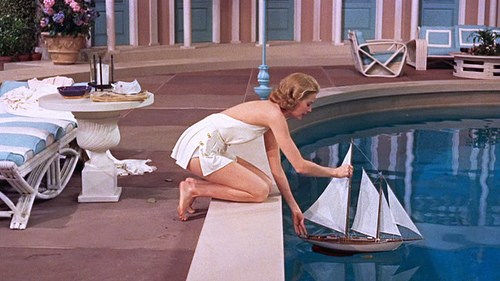 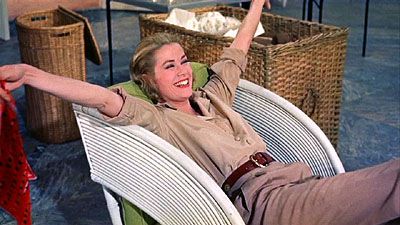 The film I watched was High Society, made in 1956, starring Grace Kelly, Bing Crosby and Frank Sinatra. The basic premise is that Tracy (Grace Kelly) and Dexter (Bing Crosby) used to be married but are now divorced and Tracy is remarrying. Tracy is from a well off family and Mike (Frank Sinatra) and his colleague who are magazine journalists come into Tracy’s home to cover her wedding for their magazine. In short summary, Tracy realises she is marrying the wrong man and remarries Dexter instead (sorry for the spoiler if you haven’t seen it).

I did like the film because I do quite like watching old films for the costumes and the romance of them all. I simply chose to watch this film because I was rooting through the dvds my mum had and this took my fancy. I went to the exhibition of Grace Kelly at the V&A the other year, so I was quite interested to see one of her films because I hadn’t before. I loved the costumes because they’re all just so elegant and beautiful. To be fair, the acting is quite ‘hammy’, I wouldn’t say Grace Kelly is the best actress in the world but I think she’s more there for her face and elegance. Its all very cheesy and over the top in places but I think you have to accept that in older movies because thats just how a lot of them were made. I did like that Bing Crosby, Frank Sinatra and Louis Armstrong were in it because it added to the songs and the music aspect of the film. Gotta love some of the old greats 🙂

If you want some easy watching and some beautiful clothes I would definitely recommend it, just be prepared for hammy acting and dodgy driving backgrounds.